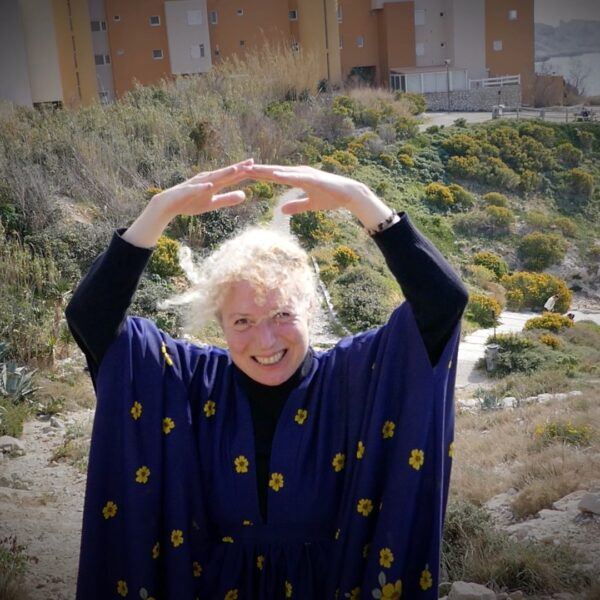 Following our recent review of her album The Velocity Of Velocities, the film-maker and poet Antonella EYE Porcelluzzi got in touch by email, and proposed an interview. The following exchange took place on Sunday 7th July 2019.

EP: Both Mina Loy and Saint Teresa may have been pariahs to some extent, misunderstood in their own time, their ideas perceived as eccentric, wild. What attracted you to the work and lives of these women? Do they share any common ground, for you? What connects them?

AEP: Thank you so much Ed for your great article of the 29th June, and for this new opportunity to talk. I want to first signal an interview I made with Kevin Press, Toronto, whose radio program « The Moderns » hosted and highlighted our « The Velocity of Velocity » record in December 2018: there you can find already some answers to your questions, but since the subject of « Velocity » is rich, I’ll take the occasion to tell you other things that had not be treated, or which I just could focus on later.

The record was born on the basis of the « Part 3. » song, the song of Theresa, I published my vocal track on Soundcloud, and Ivan rapidly contacted me since he had conceived the idea of the album after this track. The will to let women speak was there from the beginning. To be a woman artist, and to experience personally the difficulty to let my voice come out led me unconsciously to the choice of the texts by these two women. I always feel to have enjoyed a real male education, without excuses or detours for my being a girl, I worked as an economist at the Freie Universitaet Berlin for years, a male environment, in which few women had the privilege to be involved. I earned that privilege with my study, discipline and ideas. My former educators, starting with my grand-mother and mother, were feminist, I had received somehow the task to make their dreams come true. When after my PhD I went back to join my first passion, art, things got much more difficult for me. Without the armor of my studies and referents I still had my good brain-tools, but not the respect of a scene which had no criterium to evaluate my work, which moreover seems and is wild. I needed to deepen the meaning of the feminine, gender, sexuality, and this took me to clearly see the social consequences of being a woman, and to deal with it. I played, I provoked, I never left the « masculinity » I had been developing, but that just became an internal support, with no visibility outside anymore. I was just a woman again.

Both Theresa and Mina wanted to be heard, wanted to talk as humans to humanity, give their personal experience and thinking to advantage the world, both stayed unheard for long time and suffered humiliating experiences to reach some social status for their enlightened spirit.

EP: Does anything about the theology and ideas of Saint Teresa resonate with you personally? Do you have any interest in the traditions or history of Catholicism?

AEP: My family is only formally catholic, my father was a western Italian communist intellectual. I experienced something very particular with the birth of my youngest sister. A problem occurred at her birth, doctors let her come out blue from the belly of my mother, even if we had taken all precautions to choose a good clinic, so she has been suffering all her life of a brain disfunction which eventually took also to some kind of autism. She has always been of a great beauty, graceful and strong, a real personality, at first I feared her, I wanted to develop my rationality and be healthy. When I came back to art, I was ready to explore unconscious and her « madness ». My first film was on her, I started a relationship with her, which based on an other kind of communication. I believe I learned telepathy and other non-rational ways of contact. I was also much in yoga and kung-fu practice and philosophy, which preview the development of non-verbal spiritual communication tools. I studied much religions and other spiritual cultures.

Here the link to see my first film.

EP: When recording this record and performing your texts, was it necessary for you to enter a kind of trance state, a fugue? If so, how would you prepare for this?

AEP: Due to my story, as I just explained, trance became one of my fields of experimentation quite early. Sometimes, in Berlin or in Italy, unknown people came towards me telling me I have powers that need to be developed. I found several practices which interested me, and made me more conscious. I started a psychoanalysis to help myself while filmmaking too. To well answer this question I should write a book, maybe I’ ll do this one day. Ivan is such a « trance-mind » too, his presence provoked a multitude of phenomena in me, while we were working and after.

EP: The record reminded me a little of Henri Chopin, the sound-poet who communicated more with sound and vocal noises (and tape manipulation) than he did with words; in fact he rarely used words at all. Would you align yourself with Chopin, or any aspects of his work?

AEP: I define myself as a poet with a voice. Chopin never was a reference for me, I m more into American Beat. But Sound-Poetry heavily is.

This radio-show is recent, I asked two colleagues and friends to « analyse » with me the basis of the « Velocity of Velocities » album. We had created a kind of laboratory for Sound-Poetry with a radio program, which we regularly animated once a month for more than 5 years, 2011-2017, with our texts and readings, in a little group, experimenting all what was possible in the field. It’s name was « Free Poetry mit Wurst », in the air-space of Damien Morel « Dataplex-Resistances Musicales ». This new radio-show for Velocity was a way for us to meet again, and re-experiment together. So in the show, which is in French (live-recorded at Radio Galère Marseille), we linked to my « Velocity »-album authors like Meira Asher, Maja Solveig Ratkje, punk groups like Crass, champions of the Spoken-Word Linton Kwesi Johnson and Death Grip.

EP: With the “musical language” of Ivan, and your own inaudible murmurs, are you seeking a deeper level of communication than the spoken word? How would you define this?

AEP: I think this gets more clear after what I said before. With Ivan we are different, with different cultures, me from Southern Italy, he from Nordern East Europe. His experimentations into the Dark-Style, his artistic preferences for Surrealism and Dada already indicate a mental, spiritual path. To define it is not easy, it’s something which is in you and which deeply contributes to make you be alive, something essential and essentially mysterious, some kind of healing-power maybe. I really would welcome to work again with Ivan, we are not in contact nowadays, maybe we fear both to be confronted to our natural powers, which we anyway concentrated already in this record.

EP What is the meaning of the title “The Velocity Of Velocities” ?

AEP: It comes from the wonderful text by Mina Loy « Aphorisms on Futurism », which I rewrote, and which we used to create the « Part 1. » and « Part 5. » songs of our album. And also « Part 3. », which starts with a text of mine and then brings sentences from Theresa of Avila’s journal « The Interiour Castle », that song ends with the word « Velocity ». When we were searching for a title for the album we just had created together, I proposed this one and Ivan was really happy with it, it was impressing and gave us a direction to go.

See here for review of the record by Antonella EYE Porcelluzzi and Deaf Society.