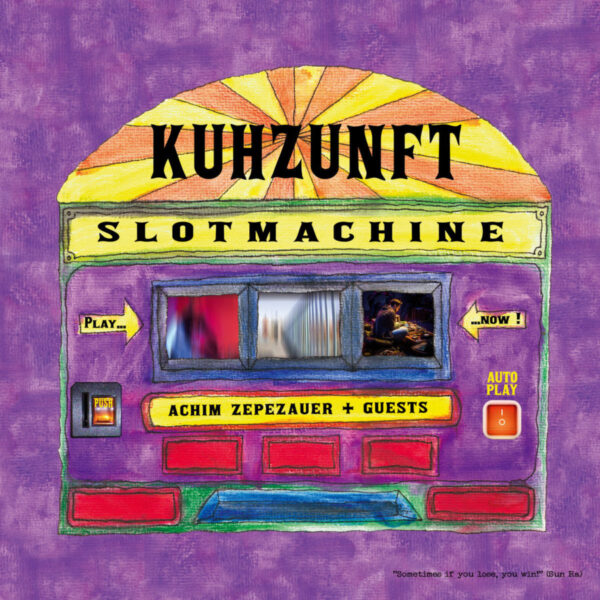 An enjoyable spin is Slotmachine (GRUENREKORDER Gruen 186), a ten-inch vinyl record credited to Kuhzunft who is in fact the multi-media artist Achim Zepezauer. He appears here with a large number of guest musicians, supplying all manner of sound art, noise, electronic interventions and conventional musical accompaniment, in duo or trio combinations; in some cases, Zepezauer doesn’t even appear on the track, but when he does he’s playing electronics and drum computer.

The next thing to note is that each track is timed at less than a minute, generally aiming I think for the 45-second mark; there are 30 tracks on this 10-inch LP, and in terms of durational minimalism this one ups the ante on The Residents Commercial Album, still for me the benchmark of this sort of exercise with its precisely-configured 60-second tracks. The guest musicians include a lot of our friends and favourites, such as Simon Whetham, John Chantler, Jerome Noetinger, and even Rhodri Davies, the Welsh emperor of post-modern harp improvisation. There are also numerous turns by Jaap Blonk, that zany Dutch vocalist, lending his penchant for absurdity to the high-jinks captured on vinyl. I should say there is evidently a large “fun” aspect to Slotmachine, as evidenced by the Dadaist titles such as ‘Weird PTK Machines’, ‘Ghostly Fireworks Scratch’, or ‘Long Hoghorn Commercials’ – these titles are typically three-word salads, and they echo the wacky aliases chosen by the guest musicians for these let-your-hair-down styled contributions.

Even this isn’t the whole picture, though. If you want to get the full-on random experience of Slotmachine, you need to spend some time on Kuhzunft’s interactive website, where you can create your own three-track combinations from the base resource of 158 separate recordings, and generate your own bag of pick-and-mix sweeties for 45 seconds of playful fun. To put it another way, this LP release sets in stone just 30 possible combinations out of a possible one billion. Zepezauer has a fascinating CV in fine art activities which includes film-making, paintings, a radio show, as well as his own electronic music performances; and he seems to have been preoccupied with vinyl records from an early age, hence this “virtual jukebox” high-concept idea. Even more intriguing is his “Cardtalk” project, a record player made of cardboard (???) which can play CDs with sounds carved into them. From 18th December 2018.