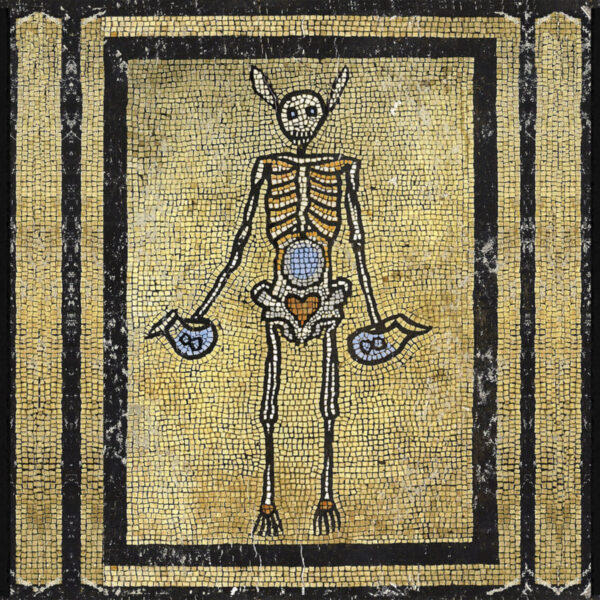 Quite the oddity is Canzone Da Parati 88 Wall Paper Song (A SIMPLE LUNCH 30ASL), a double CD which arrived from Italy on the label A Simple Lunch. It contains a whopping 88 tracks, mostly by obscure and new artists we have never encountered before, and might be a conceptual thing or a sampler, or both…every track is precisely edited and timed to last 90 seconds. Very coincidentally, we received and heard another record with many artists and very short tracks from Germany, Kuhzunft’s Slotmachine, this same month (December 2018). Canzone Da Parati was sent here by Hari Hardman, an old favourite based in the UK who has often regaled and perplexed us with his strange cassette releases of intense, whining noise, decorated with indecipherable scrawls, collages, and jumbled messages.

I have no idea what to make of Canzone Da Parati. The booklet is written in Italian, and so is the Bandcamp press note – but through the miracle of online translation, we now have some inklings as to the purpose of this odd comp. The idea may have come from Miss Virginia Muriki, but the legwork and packaging were all done by Ignazio Lago, and the production credit simply states “murikiman”. Whoever owns the creative mind behind this project, it represents a long-cherished ideal and they express some satisfaction in stating that, with its publication, we now have a collection of “utilitarian wallpaper sounds”. The blurb goes on to refer to Satie as one point of inspiration – his furniture music, natch, especially Tapisserie en fer forgé – and allude to an intention for the music to be used around the home, and when going for a stroll. “Utilitarian” does indeed seem to be the keyword.

Further, the compilers want to stress the happy accident of the random nature of the set – not one of the 88 pieces has any relation to the next, yet the entire listening experience somehow coheres into a delightful whole. This may be why a mosaic has been chosen as the cover artwork, although even this is a light-hearted pastiche (I hope) of Roman antiquity – a skeleton with rabbit ears holding two flasks or paniers, and a “like” emoji emblazoned on its hips. I decline at this time to name a single contributor, but I don’t think it’s intended as a showcase for any one artist in any case; the collective effect is the relevant process here. I note that, from the one part of the booklet that’s in English, the sequencing of tracks simply represents the order in which they arrived at A Simple Lunch HQ, and that nothing was edited – true serendipity there for you. The fact that this statement is prefaced with a quote from Rrose Selavy may also tip you off to the slightly absurdist nature of the set. As a listening experience, it is genuinely odd. Music, songs, voices, sound effects, unidentifiable things. Everything’s mostly gentle, eccentric. You never know what might be arriving next, and just as you find yourself figuring out the drift of its musical direction, the piece ends and the next one comes along. It’s as changeable as the weather. That’s a good thing.

The other thing I like is that it tends towards being mildly surprising, rather than outright shocking – others, if faced with the task of putting together a compilation like this, might aim for sharp contrasts and juxtapositions, to maintain a sense of excitement. Not here; we amble languidly from one inconsequential episode to the next, enjoying the climate for what it is, sampling a taste from one table of delights here, biting into a small fruit proffered from a dish over there. I seem to be describing a Mediterranean market place, and perhaps that metaphor works best – along with the mosaic image, of course. Unlike a mosaic, though, the constituent parts don’t reveal a larger picture to the listener – at least, not at first hearing. In case I’m overlooking it in all the above, there’s also a great sense of humour and gentle wit at play here, and one is very happy to go along with the game. From 27th December 2018.