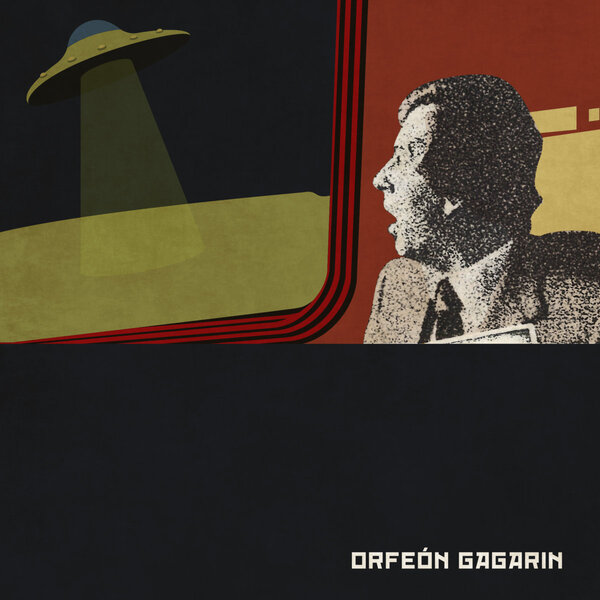 Now for some electronic-industrial music from the 1980s Spanish underground…the album Orféon Gagarin was originally released on cassette in 1986, made by Miguel A. Ruíz and released on his own label Toracic Tapes. Now here it is again to enjoy in a limited edition red vinyl pressing, from that lovely Valencia label Verlag System, a label dedicated to experimental contemporary electronica from that part of the world. Orféon Gagarin (VERLAG SYSTEM VS017) is a hugely enjoyable spin. A fine example of something that’s been ripe for reissue, for sure.

What impresses is the assurance with which Ruíz approaches many styles of music within the loose affiliation of “experimental” modes, effortlessly embracing dark industrial blows along with weird ambient, electropop beats, ethnic voices, samples, sequencer experiments, unusual melodies…and all sorts of things that can’t be categorised neatly. I especially like the economy and precision with which the ideas are assembled, making judicious use of the Korg synth, the sequencer, the keyboard organ, and tapes…it’s got that raw DIY minimalist spirit, which was evidently alive and well in Madrid in 1986. Parts of the work could also be connected to latterday German kosmische music too, and indeed Antoni Aura of Verlag System explicitly mentions the Sky label (home to Moebius, Conny Plank, Michael Rother, Gunther Schickert and other luminaries) as a point of reference. So far, so desirable…I never heard of this Ruíz before, but he’s also recorded as Exhaustor, Funeral Souvenir, Ventral Metaphor, and more recently as Michel Des Airlines; among his 1980s and 1990s albums, La Noche Del Anhídrido sounds like it could be a useful quiet devastator to let loose around the house.

As to his 1980s cassettes, good luck finding copies at any price; for example a copy of Syntax 3 from 1988 would probably cost a cool 40 Euros these days. This reissue also allows us a glimpse of the cassette / industrial underground “scene” from Spain and Portugal around this time, a history of which I know less than zero; but Andres Noarbe of Geometrik Records enthuses wildly about labels like IEP and Proceso Uvegraf who were evidently doing their part to keep the flame of independent spirits burning in a cold, indifferent world of Thatcherism and Reaganomics. Proceso Uvegraf seems to have released but five tapes between 1985 and 1986, but I bet they’re pretty good…matter of fact one of these was Climatery by Miguel A. Ruíz, of which an original copy once sold for 47 big ones…but this one was reissued in 2018 and indeed can be streamed at time of writing at Mascarpone Discos. I may seem to be shoe-horning Miguel A. Ruíz into too many genres and styles, but what comes across strongly on today’s spin is the strength of his imagination and the singularity of his ideas, sometimes verging on the eccentric. He’s far from being a gloom-merchant (as the “industrial” tag may suggest) and much of this music, though odd and angular, is upbeat and liberating. Discovery of the month for me personally…recommended! From 10 January 2019.