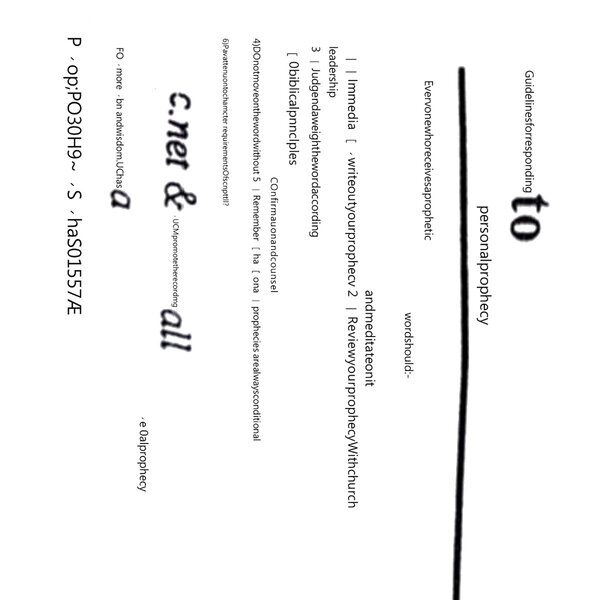 Recent cassette from Seth Cooke is Weigh The Word (SETHCOOKE.EU SC001), another conundrum and conceptual piece which does not surrender its meaning very easily. We had to exert a certain amount of intellectual effort on the last work we heard, Triangular Trade, a very layered and oblique statement which was informed by a strong sense of indignation, as it attacked what he perceived to be institutionalised, historic racism in the City of Bristol. In the case of Weigh The Word, my first thought was that this time the “target” is organised religion, but it may not be as simple as that at all.

It’s a bewildering mix of collaged elements – noise, spoken word, and computer generated materials. The latter seems to have been a big part of the experiment; Cooke refers, in his terse manner, to “sounds derived from prophetic ministry cassettes” and “their inscription onto digital formats”; there’s also a process he calls “transcription of the spoken ministry via IBM Bluemix”. Even the cover artworks have gone through the computer; texts originated in MS Word have been passed through a Word-to-PDF conversion tool, and this has resulted in scrambled words, characters, numbers, and odd fonts scattered about the page. I assume we’re hearing an aural equivalent of this process, or something akin to it, on parts of this cassette. By way of further clues, there are two quotes from scripture (one from Psalms, one from 2 Peter) provided with the release; and one further quote from the lyrics of Pete Townsend. Both the scripture pieces refer directly to speech and to writing, while the song by The Who – ‘Substitute’ – is all about looking for alternatives.

There’s probably enough conceptual mileage in that riddle alone; is our culture now at such a point of moral and intellectual decay that none of us can deal with the truth, and are settling for more palatable substitutions? I’d go along with a line of thought like that, except that the actual content of the tape is far from clear. A female voice has been passed through a text-to-speech device; the words are not clear, the meaning is scrambled, and the robotic tone is horrifying. A more recognisable voice – this time a man speaking – sounds more reassuring and convincing, but he too is speaking the most awful nonsense, some of it probably quite subversive. For these parts of Weigh The Word, I’m reminded of People Like Us and her determined efforts to scramble cosy BBC radio speech into something dark and nightmarish, but whereas Vicki Bennett creates satirical barbs that are both mordant and amusing, I somehow sense that Seth Cooke is going for the jugular here. 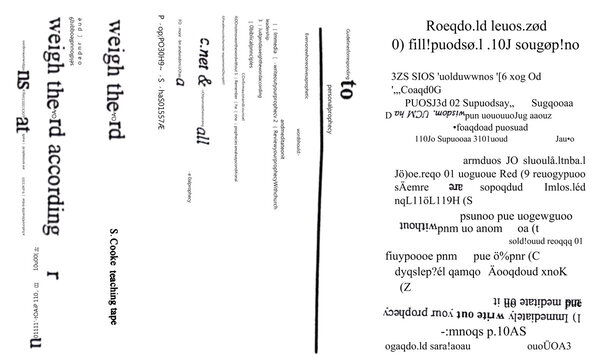 Then there are the passages of noise and static, strategically placed to alarm and distress the listener, underscoring key points in the text. On side two we apparently have real-life conversations from Christian believers speaking of their experiences with God, but these segments are not necessarily presented in a sympathetic light through Cooke’s juxtapositions and editing. So far, it’s all very problematic; sense that I’m placed in a metaphysical quandary, which might be one of the desired results. If I am right about Cooke’s agenda, he would be interested in activating the mind of the listener towards decoding the difficult surfaces of his work, regardless of whether a “solution” is ever found. That might be a hallmark of strong art, or at any rate art which struggles against its easy assimilation into the culture. It’s a kind of resistance to the mainstream, something you don’t find in the work of many artists today, a lot of whom can’t wait to be absorbed into it, and look forward to being welcomed everywhere as “celebrities” (with the attendant financial gains as a bonus).

Getting back to the “substitution” theme, it’s possible that computer technology is – according to Cooke – implicated in this process of confusion, since we have here ample evidence of the way that computers can distort meaning to the point of unintelligibility – very often without us even noticing it happening. If that’s half-right, it’s another line of thought I can go along with. As a second P.S., it might be worth comparing this record with the work of Professor John Harvey, especially The Bible In Translation. From 24th January 2019.