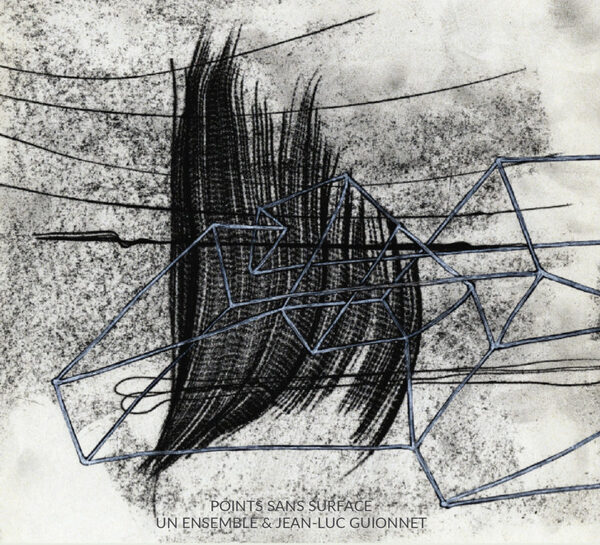 Another great piece from Jean-Luc Guionnet, the French composer and musician. Today’s record Points Sans Surface (CIRCUM-DISC LX012) is not very far apart from Distances Ouïes Dites, his 2016 work where he distributed the musicians around different rooms in the performance space, so that the usual means of communication were blocked or thwarted. In this instance, it’s a different set of musicians – the Un Ensemble, comprising 25 players – and a different location, the Halles des Chartrons et Manufacture Atalantique in Bordeaux, where this was recorded live.

This time, I think it’s true that the musicians could see each other, but they were effectively surrounding the audience in the space, and also having to compete with the enormous speaker set-up – eight of them in all, positioned at varying heights around the venue. All the instruments were capable of being picked up by a microphone, but Jean-Luc – operating his mixing desk like a ringmaster – would be pushing the amplified sounds to unexpected parts of the room, thereby creating the hoped for “three-dimensional” sensation which contemporary composers have been striving for ever since Stockhausen and his three orchestras in Gruppen. I don’t quite understand what is meant by “partition positions”, or why the work frequently reaches a point where the only recourse to be had is Jean-Luc shouting out instructions, but I like anything that takes an unconventional slant on the traditional orchestra set-up and challenges the culture of the concert hall, with its inflexible space.

Additionally, the press notes allude to a situation where “the musicians throw diagonals, correspondences, […] towards the walls, the floor, the ceiling.” This to me resembles an Alexander Calder mobile in sound, or even some form of dramatic performance where musicians have to move like physical actors, and the very sound projection itself is behaving in unpredictable ways. It almost seems to call the physical dimensions of architecture into question, which is pretty ambitious and a great, mad thing to do. It’s also about revealing detail of performances which we might not otherwise get to hear… “we perceive blocks, or lost solos” says the press release approvingly. Of course, all the above description may lead you to expect a near-riot of chaotic stabs when you play this record, when in fact it’s a slow-moving beast of largely microtonal drones and harmonics, interrupted by occasional strange clacks and unexpected bangs. That may sound boring to you, but it has dignity…dignity and a great sense of scale. True modernism at work…arrived January 2019.