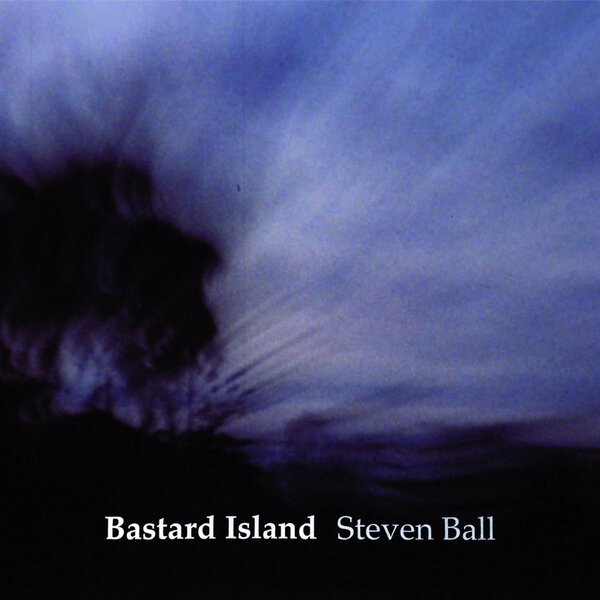 Last heard from Steven Ball with his 2017 album Subsongs, a series of disaffected glimpses at modern urban alienation drawing on all sorts of bitter experiences…the existential pain continues on Bastard Island (LINEAR OBSESSIONAL RECORDINGS LOR120), only now the setting is clearly far from “urban” and now Ball finds himself a castaway on an imaginary island of isolation, attempting perhaps to come to terms with the human condition. One point of reference for this approach might be Pincher Martin, that bleak novel by William Golding, which is likewise set on an imaginary island, and depicts the essential fallen state of mankind making frequent use of symbols like rocks, the ocean, the weather, for Martin’s condition of self-damnation.

Musically and sonically, Bastard Island is pretty much of apiece…very slow songs, delivered in a deliberately tentative vocal, with equally slow guitar playing, and much use of ambient sound backdrops to complete the overall picture. Never one to settle for commonplace ambient drone, Ball uses field recordings of the ocean and of insects (some of these brought back from Australia), and static radio sounds, most notably on ‘Pattern Accumulating’. The radio signal is not only explicitly referenced in samples, but also in the lyrics…indeed I would read most of these lyrics as a metaphor for communication (or rather, a complete inability to communicate), as messages struggle to make themselves heard through broadcast methods, fighting against the tides and the weather systems that surround this horrible island. So far we’re got a set of symbols and clues not far away from Charles Hayward / This Heat, who now admits to repeatedly using “water” as a personal symbol for lack of communication (e.g. ‘Not Waving But Drowning’) and let’s not forget the short-wave radio parts to the second This Heat album.

Having set up this series of metaphors, Steven Ball not only uses them consistently and repeatedly, he tells us that he’s doing so; half the time, the lyrics to each track describe their own making, as he recounts in precise detail what appears to be a recording set-up and the elements involved, and lists ways in which the work is disrupted by weather, static, clouds, rain, and atmospheric conditions. He’s like a landscape painter, painting in sound, while simultaneously describing his own actions, and the very canvas he’s working on; once again I am reminded of the Structural-Materialist film-makers who were so intent on remaining true to the “anti-illusionist” stance that they were obliged to keep on reminding you that you were watching film passing through a projector, rather than the seductive illusion of reality that any photographic image might be mistaken for. There’s not an exact match with Ball’s methods here, but I think he is informed by the same sense of rigour, of austerity, and honesty in the production. At one level it’s almost anti-entertainment, but at the same time he manages to lay bare the mechanics that go into the production of a record, something which mainstream rock music has always been at pains to disguise.

For some reason, when I first heard reports of Bastard Island, I expected it was going to be a veiled critique of the unpleasant forces that have been exposed in the Brexit debacle over the last few years. Instead, it’s a more general critique of what he calls “local and national social inertia”; the album depicts a chilling state of stasis, where the protagonist in these “spatio-temporally ambiguous elsewheres” is simply powerless to act, and finds their thoughts helplessly drifting along, only able to passively describe what is passing before them, without any clear understanding of what it means. From 25th January 2019.