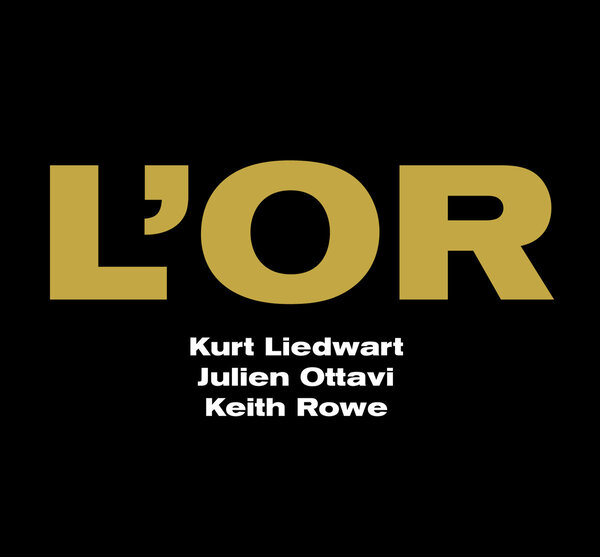 Mikroton label head Kurt Liedwart has been fairly candid on social media recently about the trials and tribulations of running an independent label, the output of which is sometimes dependent on the status of his daytime career; the health – or otherwise – of which has produced the occasional necessary short hiatus in the label’s output, so I was pleased to find this in the pile, as personally I have always been partial to previous work released by Mikroton. Having said that, the period 2017 to 2018 has been exceptionally busy for Mikroton; its release schedule numbers around twenty items. Liedwart himself is a respected “sound artist, graphic designer and curator” who has previously worked with Ilia Belorukov, Norbert Möslang, Phil Raymond and Petr Vrba among others. In this case, Liedwart has roped in some friends who also habitually work at a high level; Julien Ottavi and Keith Rowe. As any schoolboy knows, “l’or” is French for gold and by self-applying a cheeky gold standard to this recording, I think Liedwart is actually being pretty modest. Wait! Wait! Of course it is also a handy mnemonic for the artists’ surnames… I knew that.

Marseille-based Julien Ottavi’s stated interests lay in “…combining sound art, real-time video, new technologies and body performances…” He has developed his own “…radio transmitters, oscillators, mixers, amplifiers, video transmitters…” and so forth since the late 90s, but here his tool of choice is the humble computer. Liedwart uses a modular synthesiser and “cracked everyday and homemade electronics”. Keith Rowe, of course, is the table-top guitarist who started it all; the table-top guitarist all other table-top guitarists aspire to be. Notorious as part of AMM (or not) over the last 50-odd years; if you’re not familiar, the essential tome is Brian Olewnick’s recent biography published by pH Books. The music was recorded in August 2017 in Sokolowsko, Poland by Liedwart who also mixed and mastered it. The sleeve design is also Liedwart’s handiwork.

This trio gives us two pieces. On the first track, Rowe seems to be contributing fairly raw signal. Burnt umber tones with Rowe’s interjections that sound like they are produced with domestic recording equipment. Although as probably the first and most well-known “table-top” guitarist, he does more than simply laying the instrument down on its back before engaging with its potential. Rowe seems to be paring down the instrument itself – notably, he replaced his archtop jazz-style instrument for the purity of a Steinberger “headless” guitar some years ago. More recently, he seems to be utilising a second instrument; a no-frills short scale six-string; a guitar distilled down to only its absolutely most necessary parts alone. The piece ends with a very “musical” drone excited by Ottavi and Liedwart with Rowe contributing occasional splashes of noise.

The second piece begins with a slew of motors and drilling which is developed and varied as time passes. There is use of hissing and repeated descending electronic tones. Dry joints crackle. This music is mastered very loud; the amplitude tends to creep up on you from time to time, especially on the second piece, in a thrilling way. Strange and beautiful, and highly recommended.