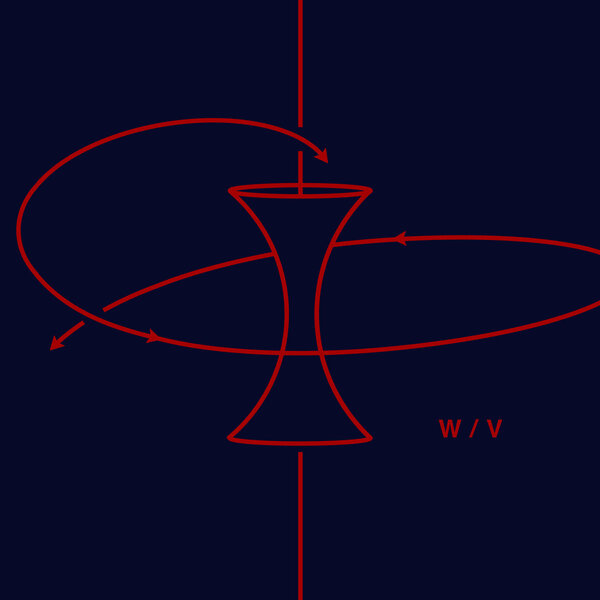 Here’s a pretty powerful blast of intense performed noise, produced using just one bass guitar and one voice…and of course plenty of amplification and plenty of effects. It’s done by James Welburn and Juliana Venter, calling themselves by the simple acronym W/V on this self-titled LP (SILKEN TOFU STX.60). Welburn impressed us with his 2015 album Hold which came out on Miasmah, a home to many a grim drone, which he performed with the help of drummer Tony Buck. As I recall, it was his bass guitar that saved the day on that particular skirmish, and it has for many years remained as a benchmark of how much a man can achieve with zero restraint. Excess is the key. He’s getting pretty carried away on W/V too, for the most part resembling a gigantic foghorn in a gigantic ocean, along with the usual hordes of charging rhinos that flatten all with their hooves.

Juliana Venter is a new name…she’s from South Africa, has a political bent to all her work, and does composition as well as using her voice like a weapon against all that is petty and dull in man. Apparently she thinks big, doesn’t take no (or yes) for an answer, and constantly hatches plots and schemes for musical compositions that frighten lesser people. One of these, which may or may not have been realised, involves her shrieking along with an orchestra of motorcycles, which seems like it would be a memorable spectacle. Apparently she used to sing with The Mud Ensemble in Johannesburg in the 1990s, spent some time in London and met a member of Cabaret Voltaire, and went to Berlin in 2004. With Joseph Suchy, she made an album for Staubgold under the name Spooky Attraction From A Distance. If that’s her visage on the cover of that 2011 album, you can tell by one look at those baleful eyes that she means business.

I’m very keen on this form of wordless vocalising that she wrenches out from her spirit as though she’s being exorcised, and this isn’t to say it’s all shriek and terror – she can also do the icy-whisper thing in ways strong enough to reverse the effects of global warming (we wish). This is especially true of the B-side of this roary platter, where the duo perform ‘Moonunit’ with a glacial calm producing creepy nocturnal atmospheres where endless terrors lie in wait for the unsuspecting gnomes. That’s in contrast to ‘Concave’ on the A-side, which is mostly a flamethrower assault to the face and body (bring your own asbestos suit). In a way, this pair could be seen as the natural successors to Gira and Jarboe from Swans – bludgeoning guitars and punishing voices, all used to attain similar cathartic results. This one’s for the cement-mixers among you…issued in a black and red cover, from 10th January 2019.