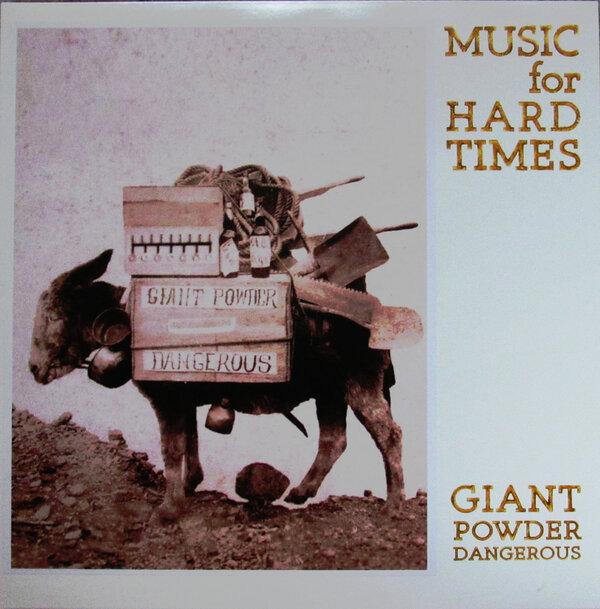 Paul Winstanley sent us CDRs from New Zealand many years ago, released around 2002-2003 on the Eden Gully label – among these were strange low-key noise items by Dial, Sci Hi and Buildings (with their Travel in a Balloon item). Paul was involved in some if not all of these, and I’m fairly sure Sci Hi was an alias for his solo act. He’s back again today as one half of Music For Hard Times, performing with Tom Nunn, and apparently based in San Francisco.

The album Giant Powder Dangerous (DOCKING STATION 101) has been issued as a vinyl LP in a print run of just 200 – my copy has hand-pasted covers with rubber-stamped lettering, and there’s an endearing home-made feel to the whole project. They’re an improvising duo creating totally abstract free-form noise of a very scrabbly nature. Paul plays a highly modified bass guitar – five strings, no frets, unusual tuning, bits of metal and clamps stuck into the strings, and fed through effects pedals. Plus he uses foreign objects including bows, screwdrivers and motors (as well as his fingers) to pluck the strings. If that’s not unusual enough for your tastes, the only thing that can satisfy you is the “skatchplate” of Tom Nunn. Nunn, from Texas, has been building home-made instruments since the 1970s, and apparently has invented hundreds of them. The skatchplate is pretty much a modified washboard or rubboard, an instrument sometimes used by country blues musicians as a makeshift percussion device. One famous performer was Washboard Sam, but there are others; it’s often associated with Zydeco, and appeared on Clifton Chenier LPs well into the 1960s (played by Clifton Chenier). Even The Residents claimed to play a rubboard, on The Third Reich N Roll.

Well, Nunn has expanded this into something quite personal and unique – a sheet of cardboard with lots of objects attached to it, such as metal washers of various gauges, combs, and toothpicks. He also plays it with a comb. Two pickups are attached underneath, so it’s amplified, and can be categorised as an electro-acoustic instrument. Plenty of modification going on between the two of them, so it’s no wonder that Giant Powder Dangerous sounds as utterly bizarre as it does. It’s also very low-key, acoustic-ish, despite all the electronification that’s involved. If you want wild power-noise, look elsewhere; this is rather gentle, loping, idiosyncratic sound-art, generated in an unassuming yet very determined manner. At times it seems virtually “organic” to me, if that makes any sense, almost like the sound of termites chewing a tree trunk or boring through the wooden door of an old shack. Perhaps it’s a title like ‘Killer Ants & Poison Flowers’ that is suggesting this notion to me, but the metaphor stands.

There’s almost no concern with conventional music aims, such as extended technique or tone production (which you tend to get with musicians who improvise on saxophones or guitars); instead, Music For Hard Times are simply about the noise that they make together. It may not surprise you that this fits in quite well with the Public Eyesore aesthetic (said label is also based in SF), and indeed their 2014 record City Of Cardboard for that label has been reviewed in these pages. From 22nd January 2019.