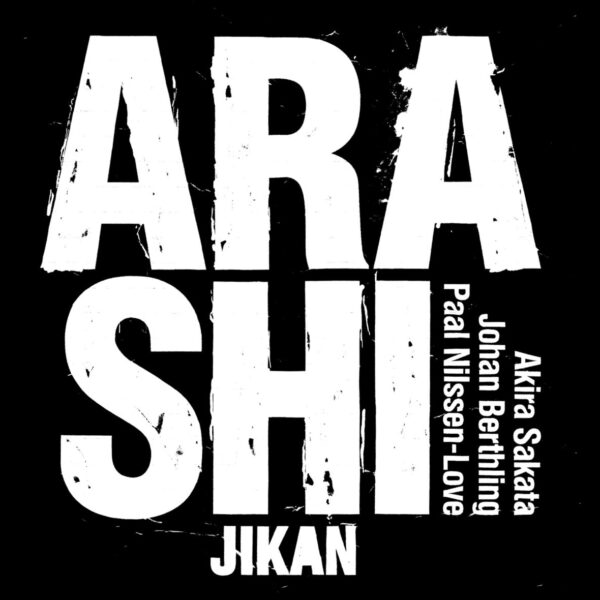 A first glance at Lasse Marhaug’s sleeve design displaying a smattering of distressed, extra bold stencilled lettering screams (like a sax reed bitten into submission) Peter Brötzmann, brass pneumatics titan and holder of ‘The Best Beard in Jazz’ award for ten years running. That penchant for ugli-type however, signals another valued instalment in the career of alto saxist/clarinettist/vocalist Akira Sakata, a fellow pioneering spirit with a near half-century of solo releases and collaborations under his belt. And someone like his near contemporary (only four years separate them…) also chose to adopt and transmit a more urgent and direct system of communication compared to the usual, received lyrical codes of the time.

Akira is joined (at the hip naturally), by two men now rightly regarded as the ‘Mister Dependables’ of the Scandinavian avant-jazz scene. Paal Nilssen-Love‘s powerfully assertive drum work and Johan Berthling‘s steely grasp on the vertical double bass can almost automatically write themselves into almost any challenging position should the call go out. A case in point being a live debut at 2013’s “Molde Jazz Festival” in Norway, working as ‘Arashi’; named after a classic album by the Yasuka Yamashita Trio (on Frasco Records/1972), in which Akira played an integral part. Since then, that three-way chemistry has continued to evolve in the shape of a series of successful tours of Europe and Japan, plus a couple of releases on the Trost label. Jikan, the trio’s third, is a live recording captured at Tokyo’s ‘Pit Inn Club’ in 2017. The opener “Saitaro-bushi Arashi” is a showcase for Akita’s extraordinary vocal outbursts of a Ludo Mich/Jaap Blonkesque dada intensity, while the title track and “Yamanoue-no-Okura” scotch the notion that in frazzled, high-energy jazz circles, ‘lil brother’ alto doesn’t have the muscle/testosterone levels that the tenor and baritones possess. Don’t you believe it… Here, its upper register giant baby screams worm a rambunctious zigzag path through a deep, dark gorge of scattershot ‘n’ churn. Seemingly with the group’s collective energy levels down a notch (who can blame them??), the final track “Tsuioku” (Remembrance), a work-out for b-flat clarinet, adopts a slower, brooding stance. Curiously it’s only when the last note finally dies out does the audience come to life! Just what is Japanese for “Encore” ?

If an accurate pictorial representation of the sounds generated within is needed, one only has to look at Frank Schindelbeck’s very striking hyper-realist photograph of the trio that’s located on the sleeve’s inside gatefold. These guys mean business!