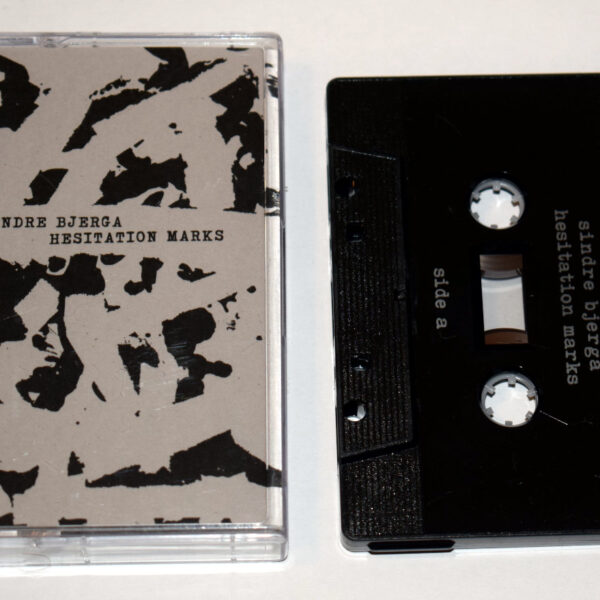 Sindre Bjerga from Stavanger is still elbowing aside the competition to become some kind of Crown Prince of mangled gibberish-noise, a station he plans to occupy through his outrageous manipulation of pre-recorded tapes. We’ve heard him doing it to the mass bewilderment of most of the Western world, on past great releases from LF Records and Tutore Burlato, notwithstanding his noisier and more abrasive contributions to the aggressive poots of Star Turbine duo. Here he is with Hesitation Marks (EH?106), a solo cassette which serves up documents of two live performances in Den Haag and Berlin from 2017. A good deal of the listening pleasure on our part is picking out the chunks of familiar sounds in what is otherwise a completely foreign and alien spew of glorpy blipperings and slurped boshderments, where the element of surprise ranks highly and nothing is what it seems. Sindre Bjerga is the exact opposite of electro-techno geniuses who slave behind a computer aiming to achieve a perfect, hard-edged sound; instead, he delights in slippery, organic, rubbery shapes, which change frequently before us, and rarely settle on a stable form. He handles them with buttered fingers. It’s much to his credit that he can sustain this egg-juggling mode for such long periods; most lesser men would be driven mad. Long may he Bjerg his Bjergas. 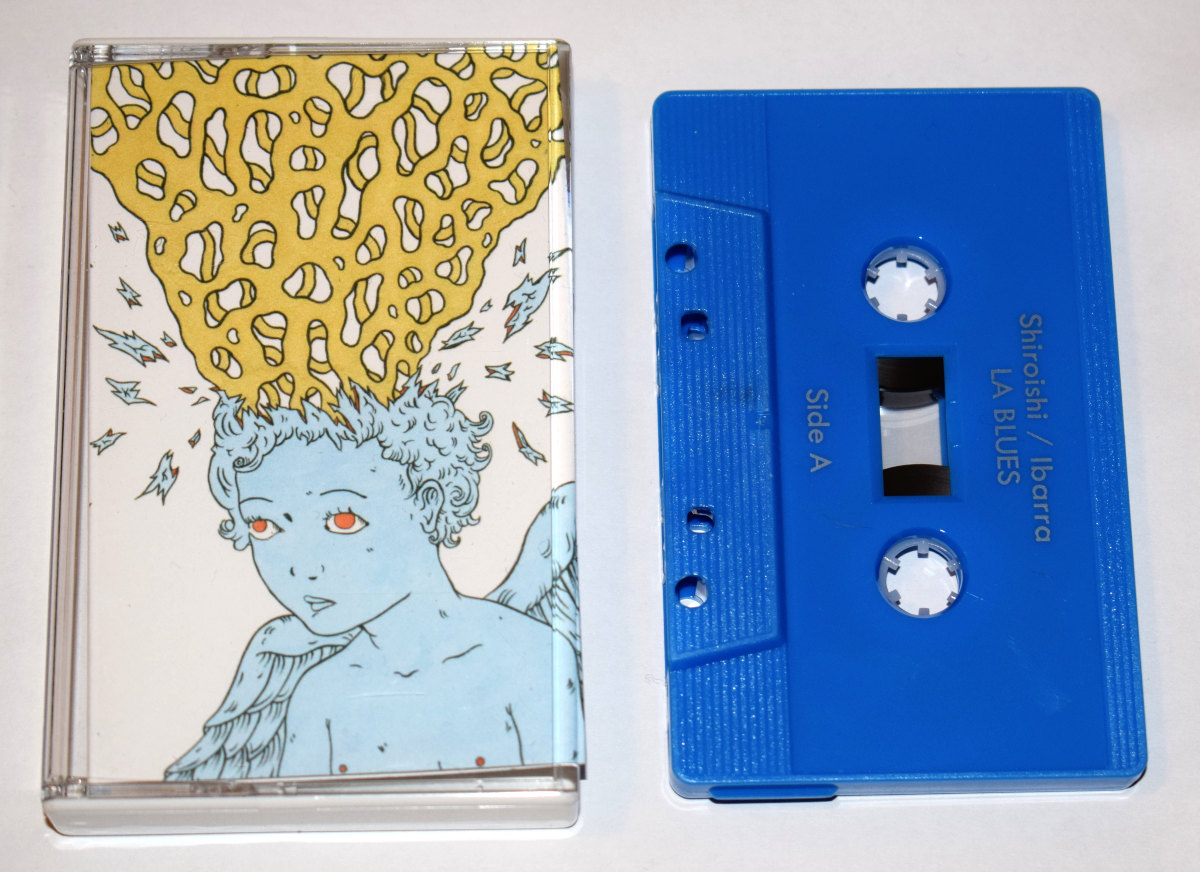 Spicy free noise jazz blurt interplay on LA Blues (EH?105) from the duo of Patrick Shiroishi and Arturo Ibarra, freely ejaculating their amazing noise from their penis-like instruments…Shiroishi does it with the alto saxophone, Ibarra uses the guitar, but the end result is always a sweaty tussle of a highly lascivious nature, little short of an unrestrained orgy happening right there on the stage. They’ve drawn inspiration from that “titan” of free jazz and improv in Japan, Masayuki Takayanagi, who did things in the 1970s that are beyond belief. Takayanagi it was who developed his notions of “gradual projections” and “mass projections” to describe and guide his musical exploits, particularly useful in framing group performance situations I would imagine. Patrick Shiroishi and Arturo Ibarra emulate that line of thought as best they can with enthusiasm and gusto. Of the four tracks that are wanged out here, two of them fall into the “mass projection” category, meaning (in their own words) “bombast, intensity, and a total disregard for anything approaching conventional melody or structure”. That’s the kind of extreme polemic which certainly gets my juices racing, especially when the results are as sexy as this. On the other hand, I kinda like their minimal / restrained efforts too, and if you personally prefer your improv to be sensitive and slow, then get out your erotic love candles and get busy humping to ‘Projection 14’ and ‘Projection 3’. I think these two Jap gonks are fairly young and new on the “scene”; at any rate they also appear as Sewing Circle (with bassist Noah Guevara) on a 2017 cassette called Nausea, which might be a raunchy blaster. They did this one live in Los Angeles in Nov 2017, causing a scandal locally. 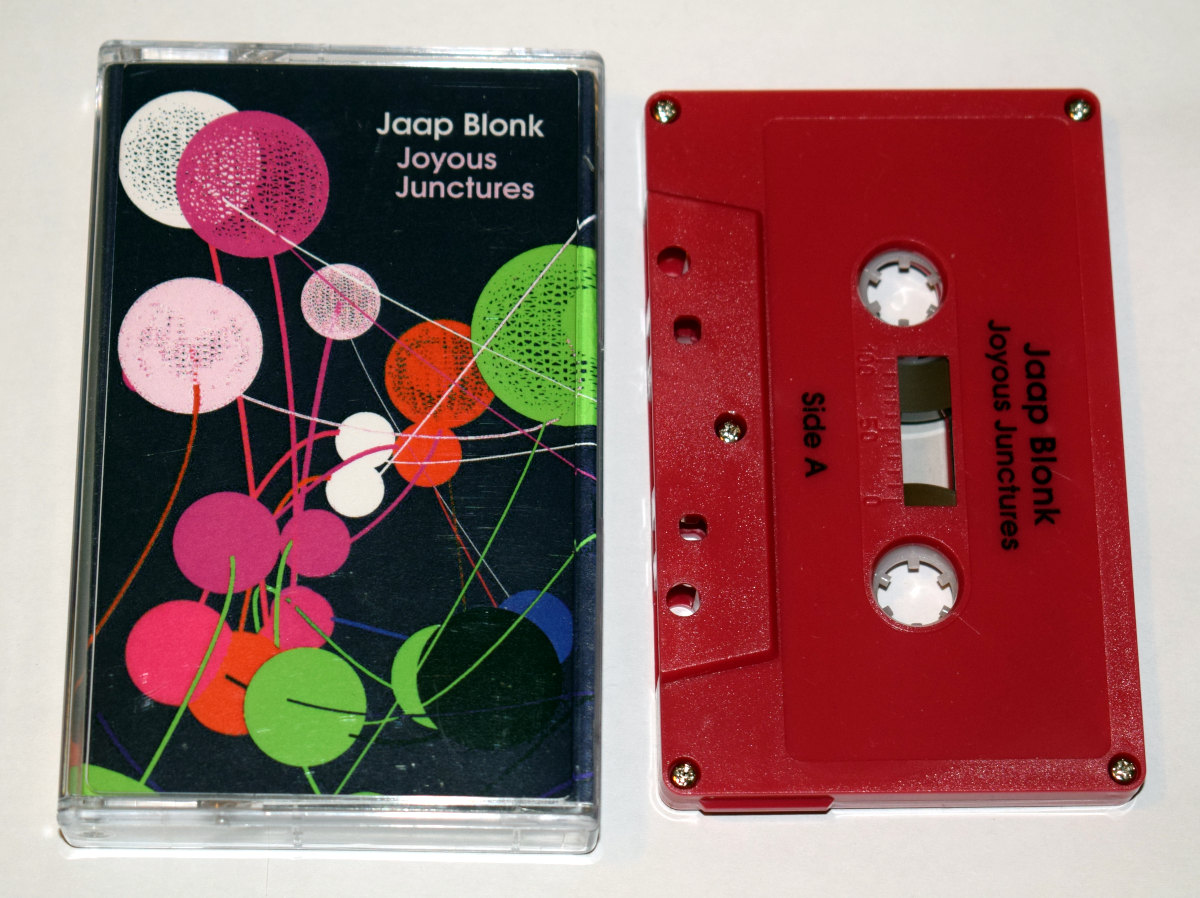 Jaap Blonk is the Dutch maestro of Dada-inspired vocalese noise who has long ago arrived in a space which only he can occupy; Sindre Bjerga, though good, is still striving to get there. On Joyous Junctures (EH?107), Blonk combines his familiar outrageous voice hoots and nonsensical flappery-barks with various forms of fragmented, doodly electronic music and percussive snippets, making a much richer record than if it was just him and a microphone. The echo effects, used boldly but tastefully, also lift the performances into extra-trampoline mode. I scanned the titles for further evidence of Jaap Blonk’s semi-lunatic outlook on life, but in this instance the words used are mostly delightfully prosaic and utilitarian, some of them not far away from titles which might have been selected by a Satie or a less vengeful Alfred Jarry. On some tracks, it’s evident Blonk still can’t shake off the ghost of Kurt Schwitters (one of Blonk’s earliest releases was a version of the Ursonate), but that’s a good phantom to be carrying around in your mental pouch. As title promises, this is indeed an album full of joyous sounds and happy coincidences, a trip in a balloon that makes absurdity and madness seem like great fun.