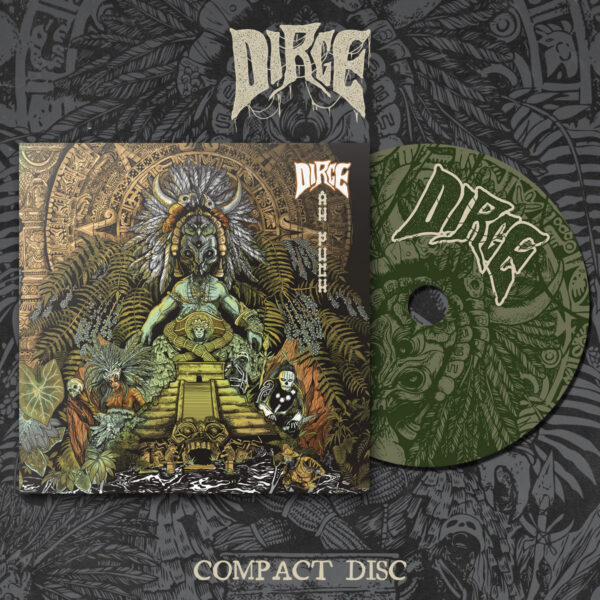 In ancient Mayan religion, Ah Puch was one of the names of the death gods who ruled over the world of the dead and who were associated with darkness and disaster. The Aztec equivalent was Mictlantecuhtli or Lord Mictlan. These gods are the inspiration for this debut album by sludge doom band Dirge who hail from Mumbai in India. In a light-bulb moment, Dirge decided to mix Mayan and Aztec mythological elements with a quick history lesson on the conquest of the Aztec empire by Spanish conquistadores under the leadership of Hernan Cortes, who also had help from indigenous Mexican groups under the rule of the Aztecs, in the 1520s. The result is an interesting narrative on how Ah Puch / Lord Mictlan gets his fill of war, blood and gore from both the Aztecs and the Spanish, playing both sides off each other as it were, and this theme inspires and pushes a set of very heavy grinding sludge doom songs with death metal elements and a strong sense of dread.

“Invoking the Demigod” sets the tone with hard-hitting concrete-slab riffs, solemn thumping percussion and ragged screeching guttural vocals. It’s a steady track with a strong focus, plodding yet relentless, a form of punishment in itself. In later parts of the track, melodic death metal elements creep in and the song finishes in a blur of lead guitar feedback and cold atmosphere. For some listeners, this will be the outstanding track on the album; for other listeners, the follow-up “Montezuma’s Revenge” with its mix of hyper-doom melodies and riffs along with the shrieking vocals and the stentorian bass grit turning the song into heightened sludge doom theatre, will be the stand-out. As on the previous song, “Montezuma’s Revenge”, in which the spirit of Ah Puch enters the dying Aztec king Montezuma, explodes into lead guitar roar at its climax and the song ends in six-string howl.

The album continues in much the same vein with ever more stupendous death-influenced sludge doom crushing all resistance before it while singer Harshad Bhagwat wails overhead. The music can be overpowering and sometimes monotonous, though in later parts of most songs the lead guitar solo turns out to be inventive and energetic, providing a refreshing break in what would otherwise be wall-to-wall sledgehammer doom. A brief interlude “The Dilemma”, dominated by acoustic guitar melody, gives listeners a much needed pause from too much juggernaut power. From then on, the album resumes its tale of how individual humans like La Malinche, Cortes’ interpreter, advisor and mistress, and Cortes himself, succumb to Ah Puch’s bloodlust.

Each song is a tremendous juggernaut in itself, highly intense and packed with plenty of melodies and riffs, and is probably best heard on its own. However the six tracks are chapters in an overarching narrative, meaning that they have to be heard as a whole, and I daresay a lot of listeners may be worn-out hearing just the first half of the album as the intensity of the music and the lyrics can be extreme. Later songs lose some of the early sludge doom style and become cleaner, more prog-rock and even a bit commercial and generic in their sound. It’s almost as if the band is running out of steam and getting quite exhausted themselves after the halfway mark on the album. The songs probably could have been edited for length with no harm done to the album’s theme or the music’s intensity.

For a debut album, this is a very impressive effort even with the flaws and inconsistencies in the music. Dirge have some work to do, to keep to a consistent style while incorporating a range of influences, but I’d say these guys are worth watching in the future.