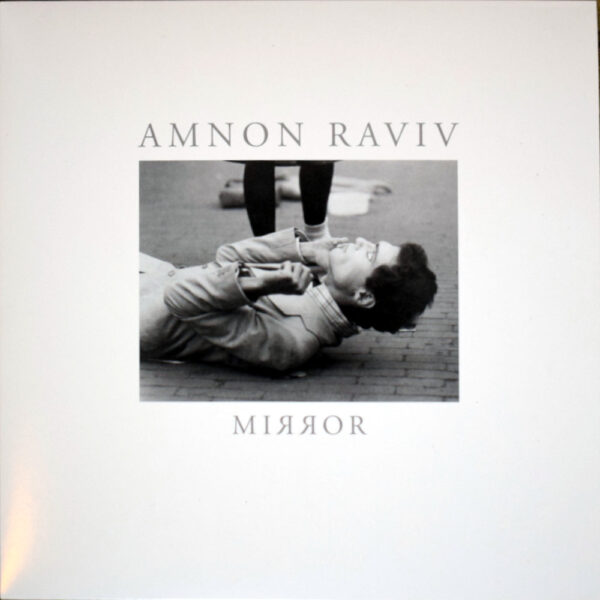 A new release from Clive Graham’s label Paradigm Discs is always welcome at TSP mansions. We’re still eagerly awaiting a second volume of The Seddon Tapes, a largely spoken-word set of telephone conversation sounds which we received in January 2018. Before that there was Rock and Other Four Letter Words, a record which was a fascinating collage exercise and one with fairly profound sociological implications, as it dug into the world of mainstream rock music of the 1960s and cast an awkward angle on hippy culture. Now comes this reissue of Amnon Raviv’s Mirror (PARADIGM DISCS PD 34), an item which surely ticks a lot of boxes for this label’s aesthetic – self-released, quite obscure, and delivering a reflection of the singular vision of its creator. Israeli creator Amnon Raviv made this record in 1983. There were originally just 50 copies of Mirror, each one with a different hand-collaged sleeve, and they were only for sale in Tel Aviv.

I found Mirror likeable and charming, perhaps not especially weird, just rather odd. My general impression is that of rather meandery musical interludes, spliced together with strange and unpredictable sound effects. Right away one gets a sense of the non-sequitur logic of Raviv’s brain stitching things together, working to a logic that’s not easy to follow, but it’s lovely. On side two this method seems to work best when it’s heard over two slightly more extended “suites”. The first one (there are no track titles, only numbers) only just threatens to get out of control, the elements piling up into something like a train wreck, but doesn’t quite deliver if you were hunkering for some honest noisy chaos. The second one (Number 6) of these B siders is more ambiguous, and once again the music just seems to be wandering off down interesting rabbit holes and blind alleys. There may a bit more attack on the shorter pieces on the A side, and the lively Flamenco-influenced guitar is hard not to like. There’s also the maddish piece with chickens and woman laughing which closes Side A, may feature Amnon’s wife, and I think is made from tape loops (it seems to use the same repeated phrases). The varispeed technique goes pretty bonkers too. Apparently a fair amount of the source material comes directly from the streets and neighbour’s houses – whatever he found around him was fair game for inclusion in his sonic grab-bag.

The cumulative effect of all this is certainly unusual, and I wouldn’t call this record an outright freakeroonie of musical wonder, just a slightly balmy series of disconnected musical statements. One could I suppose compare it with the Dwight Frizzell records which Clive Graham also put out, especially Beyond The Black Crack, except that Frizzell has much more content and depth to much of his work, and there’s an interest in the shared excitement of group playing with friends which Amnon doesn’t seem to share to the same degree. Yes, other musicians do feature on Mirror, but oddly enough it still feels like a solo record of Amnon Raviv, not so much engagement with the interactive improv thing. Frizzell also paid close attention to unusual timbres and pitches in his electro-acoustic tape work, while Amnon is more of a zany collagist type throwing stuff together to see what works. I like this free-spirited, spontaneous approach, even if it can be hit-or-miss.

Mirror is one of these almost-forgotten hand-made records from the past resuscitated for another audience. Clive Graham evidently has a continuing interest in rescuing these private press obscurities. Well, if you read Record Collector magazine, you’ll already know that self-pressed releases are not unknown in the worlds of UK folk music and progressive rock in the 1970s; however they were made by musicians who probably would have loved to get a record contract, but mainstream success eluded them. There’s something to be said for self-releasing when the act becomes almost an art statement in itself; for sure, Paradigm is after the avant-garde weirdies whose limited run meant they barely showed up on the cultural radar. Brast Burn was one such, Beyond the Black Crack was another (though that was also a NWW list item). The original Mirror had cover art made of found debris – bus tickets, scraps of newspaper, and such like – hand-pasted onto a plain white cover, with the lettering added by hand (I think). This Paradigm reissue prints a facsimile of one of the covers, but puts it on the insert; the cover photos for today’s record were taken one year later in 1984, in Amsterdam.

Raviv has added liner notes to this reissue, with some clues as to his intentions with this musical statement. The notes are terse, and I must admit I prefer it that way. The idea was to translate his own inner reality into musical and aural form, a personal expression of thoughts and feelings, which may seem a fairly obvious thing for any creative individual to do, until you learn that each separate piece has a very specific aim behind it. For instance, we are told that “the second piece expresses intense pain” – and I’ll leave to you to wonder how that one sounds, until you buy your copy. It might not be too far-fetched to imagine Raviv regards Mirror as a form of art-therapy for himself (and perhaps offering a mild form of catharsis for the listener too). Something resembling this line of thought seems to have continued into his current work as a medical clown, an activity which I assume promotes well-being through mirth and good humour (and music). The journalist Norman Cousins might nod his head in agreement with that; he managed to work out his own cure to a crippling illness, in which laughter (as well as a lot of determination and self-belief) played a large part. 1. My mind also turns to Dave Knott, the Seattle guitarist who I met in 2002, who firmly believed in the healing power of music and used to carry his guitar around the wards spreading healing vibes. 2 With Amon Raviv however, I suspect this isn’t exclusively about the medical clown credentials which he holds, but evidence that he has followed a very singular path of self-actualisation. The image that most persuades me of this is the back cover, where he is performing with tailor’s dummy arms; they are more than simply zany props, and appear to me like an extension of his artistic reach. The look on his face in this photo is that of a man in a trance-like state of possession, focussed on his goal. Limited edition of 500 copies, arrived 14 June 2019.