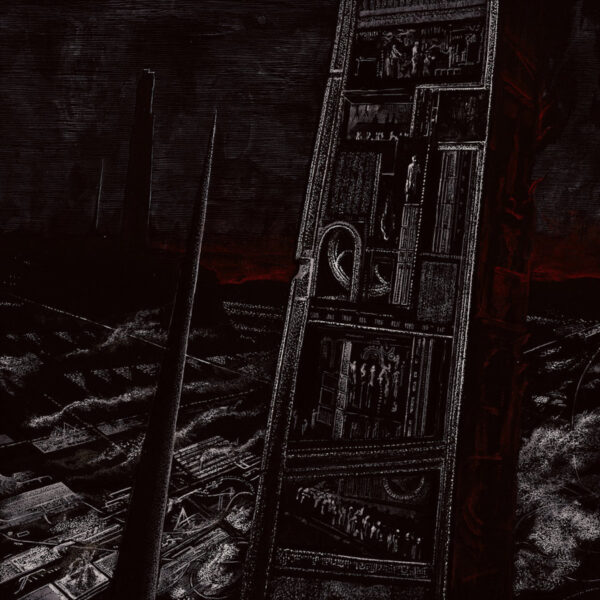 After 20 years – whut, 20 years?! another  extreme underground black metal bunch I know celebrating 20 years? – as a full-fledged band, originally a side project to guitarist Hasjarl’s now-defunct group Hirilorn, DsO celebrate the end of their second decade and the start of their third with a rebirth (“palingenesis”) that casts the band’s music, lyrical concerns and perhaps even DsO’s concept and direction in a new iteration. Certainly the change in the band’s musical style is apparent: the songs are shorter, less complex in composition and the music less layered and dense. Some of the experimentation and the jazz tendencies have gone, and while the album as a whole can still be an exhausting experience, it is easier on the ear. The biggest change is in the band’s lyrics: more straightforward and transparent, they adopt a either a first-person or second-person point of view that can be more confrontational for listeners to stomach. The focus is no longer on monotheistic religion and its institutions as forces of repression – instead, DsO now cast a wider eye on the way in which elites in society influence and control the public by pinpointing its grievances and sufferings, and using those to galvanise people, especially young people, against those they believe to their oppressors, all the while manipulating both or several sides for their own nefarious ends. Reading through the lyrics, I can’t help but see that much of what DsO have written could serve as templates for revolution and conflicts instigated by hidden agencies in various parts of the world, including wealthy First World nations as well as downtrodden, dirt-poor Third World countries. Other reviewers may see in the lyrics a mockery of fascism or authoritarian government generally, especially that brand of authoritarian government that proposes to remake humanity or human society in a new form, no matter what its ideology actually is.

While there’s still that cold and unearthly underground-catacomb ambience in parts of the recording, it’s not so integral to the music, and long-time fans may find the album sounding rather flatter and less sculptured as a result. There’s less of that dark jangly jewelled guitar sound as well and all the emphasis is on the chaotic density of the music as it careens from one side of the black chasm that DsO inhabit to the other and back again as they travel at their usual breakneck speed. In slightly slower parts of the album, with heavy choppy riffs, precise technical percussion, huge waves of doomy keyboard-generated orchestra droning and a slavering gruff vocal, DsO sound much like a blackened death metal band.

Songs are not distinct in themselves and really have to be heard together: the whole of the album is much greater than the sum of its parts. Middle track “1523” sounds a bit more traditionally DsO than most of the other songs: it is surrounded by a deep, almost dank ambience, as if the musicians were stuck in one of the deeper dead-end parts of the labyrinthine catacomb system they dwell in. On some other songs, like “Standing on the Work of Slaves”, for once most instruments, even the bass, can be heard fairly clearly. The stand-out song though comes at the very end: this is “You Cannot Even Find the Ruins …”, an uncharacteristically slow doomy dirge to the Straussian world that has been built up by the lies and propaganda of the elites, until the tensions and contradictions inherent within that world end up destroying it totally, taking back into chaos the elites as well as their duped and exploited slaves, and any stragglers left behind have only themselves and what they remember to rely on. The music appears to fall apart through constant changes in key and a deliberate and gradual slow-down in pace.

This is an epic work, monumental in its realisation as well as in its ambitions – and yet somehow I feel DsO have done much better work in the past, perhaps because in this new rebirth the band has given up much of what made DsO the underground black metal legend it is. Certainly the music on this album seems much less grand, even a bit more ordinary, dare I say, even when the band is on fire and nothing seems beyond these guys, than on previous recordings.

As with other DsO albums, the lyrics on the recording are actually a fraction of the full lyrics in the booklet so this is definitely a case where you have to buy the physical album to appreciate it in full.