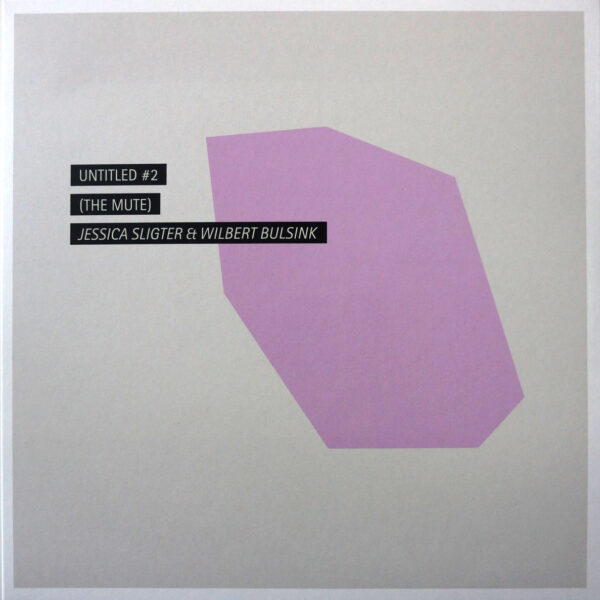 Dutch-Norwegian artist Jessica Sligter released her third album Polycrisis:yes! last year to a fair amount of enthusiasm from the internet, a kind of steely electronic avant-pop. Promoting her appearance at Rewire 2019, it was described as ”…a futuristic imagining of a collapsed European identity that weaves excerpts of speeches by European Commission President Jean Claude Juncker into a bleak but brilliant portrait of our times”. Wilbert Bulsink is a Dutch composer. He has received commissions from a number of music ensembles in the Netherlands including ASKO|Schönberg, Nieuw Ensemble, Looptail, Rosa Ensemble and the Nederlands Blazers Ensemble. His compositions have been performed during Gaudeamus Muziekweek, November Music, Holland Festival, the ISCM World Music Days in Ljubljana and the Huddersfield Contemporary Music Festival.

The music on Untitled #2 (The Mute) is performed by a group comprising Bulsink operating live electronics, while Sligter performs voice and live electronics; Ole-Henrik Moe plays viola and Kari Rønnekleiv violin, and the album is arranged as five separate pieces titled after the first five letters of the alphabet; “A” to “E”. A quick check confirms the note Sligter sings for the whole of “A” is, in fact, the note A. Sligter sings it wordlessly and in a manner fairly unchanging. The next piece is very short at one minute 43 seconds and consists of a quiet, kind of ambient, wash of grey electronics. The result is that when “C” begins – very loud – it has the effect of a very violent jump-cut into this piece which seems as if it has already been running before its channel strip is turned on. Deliberate or not, this device is sudden enough to make the unwary listener jump. Violin and viola are working together like a well-oiled machine, however, and interface neatly with moving electronic tones. Jessica Sligter commences her texts. Towards the end of the track her voice is treated with studio reverb in various ways.

In the middle of “D”, while Sligter voices ideas of travelling and boundaries, accompanied by high pitched whines and viols droning, there is a passage where machines power up; power down; power up again. Harmonic overtones appear and disappear. I’m not sure if this is the result of Poul Holleman’s work “…designing the Max/MSP patch for this piece”, but it’s really good. I wonder if the vocal melodies were scored; often the melodies seem random; a non-improvisor’s idea of improvisation. Mostly they are sung in a distracted way, almost as an afterthought… The final piece employs an electronic component which sounds like futuristic warplanes dive bombing a piano string factory. This could again be Poul Holleman’s Max/MSP patch at work. Vocal artefacts filtered through heavy reverb in the background. Then: a vocal yowl or garble, looped. A moment of silence, then it is back, seemingly twice as loud, followed by a brief silence. Then again, slightly higher in pitch. Then brief silence. Then again. After a short while I admit I did find it challenging. And so it continues until you either go mad or jump up from your seat to turn it off. Interestingly, Bulsink uses a similar strategy of sudden, violent amplitude on his recent piece Spelingen for harp and orchestra.

There are copious sleevenotes on both of these Gaudeamus & Unsounds discs; on Untitled #2 (The Mute) they are in the form of a short essay by Salome Voegelin who examines the idea of “collaboration”. Interesting as this is, it sheds no light on the specific collaboration between Sligter and Bulsink or their creative motivations. Intriguing as the music on this album is, this listener remains pleasantly none the wiser.