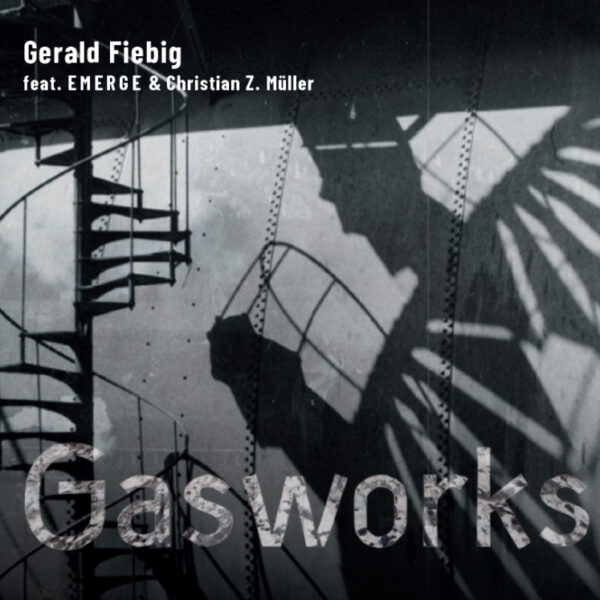 Based on very scant clues, I would guess there may be a trend emerging among phonographic types and installation artists to try and document old 20th century buildings and their functions. I only have two recent examples I can call to mind: Aldaris, which Rihards Bražinskis and Raitis Upens made for Unfathomless in 2017, and which used sounds from an old beer brewery; and Optimistic Modernism, which was recorded in a now-closed printing works that had formerly specialised in the old technique of photo-litho. Today though we have Gasworks (GRUENREKORDER Gruen 179), made by Gerald Fiebig with the help of EMERGE and Christian Z. Müller, and it may serve as a tertiary entry in my imagined series. Fiebig has been making sound works out of the old gasworks in Augsburg-Oberhausen for over ten years now. The present CD, released by Gruenrekorder who specialise in this sort of thing and spare no expense in supplementing the record with full colour booklets of notes, compiles examples drawn from many of his major experiments and soundworks in one place.

Fiebig is fully au fait with the history and context of the Augsburg-Oberhausen gasworks. In a concise history, he tells us it opened in 1915 at a time when our ancestors were untroubled by environmental concerns, and freely burnt fossil fuels to generate energy; Fiebig calls it a “heroic age of industry”, perhaps rather ruefully. We’re not heroes now. He is also aware of the fact that this work still goes on today as part of global capitalism, just that it’s been outsourced to poorer countries, and damage to the environment through carbon emissions continues unabated. He also has no illusions about the working conditions in Augsburg-Oberhausen during the 20th century, and indeed these are detailed by an ex-employee telling his story on the track ‘Nach der Industrie’, presumably in pitiless detail (I’m not sure, as it’s all in German). Fiebig also points out that the gasworks has now closed and been “reborn” as an arts centre, a fate awaiting many former industrial sites; in my country, I could point to the Baltic Centre in Gateshead, for instance.

Besides all this history and culture, naturally it’s the sonic potential of the gasworks that gets Gerald Fiebig’s juices flowing. On the track ‘post-industrial’, we hear sounds of hissing gas from a kitchen stove, subjected to multiple layers of processing and interventions; some of this is done by EMERGE, who combine the hissing noise with field recordings from a nearby factory. This 16-minute track is excerpted from a longer installation work; fans of ‘Music like escaping gas’ by This Heat will doubtless appreciate the aesthetic charms of this one. While that one is a documentary of sorts, ‘Ohrentachen mit Echolot’ (presented here in two parts) is a performance piece, where Fiebig using objects, voice and his own body to create resonant sounds in the huge echoing “gaskessel” he loves so well. When I tell you this metal chamber is 84 metres high, is it any wonder than his inner Blixa Bargeld was stirred to action? It’s also slightly unconventional for the audience who came to see it, as they had to walk around Fiebig as he made his movements in the centre of the arena.

We’ve already mentioned ‘Nach der Industrie’; this is a piece of oral history, adding yet another dimension to Fiebig’s comprehensive survey of the site. Johann Artner worked there since 1947, for over 40 years; Fiebig interviewed him, compressed two hours of narration into 26 mins, and combined the spoken word excerpts with those same hissing gas sounds. The hiss provides a remorseless, sinister accompaniment. I haven’t yet read the English translation and transcript, which is online, but I sense it’s grim; Artner occasionally cackles with gallows-humour as he recounts his personal history in a stark and plain-speaking manner.

The last piece is probably the most exciting and interesting, both musically and sonically. ‘Echoes Of Industry’ was realised with the help of Christian Z. Müller, who improvises on the saxophone and theremin. On this radio piece, Gerald Fiebig played back his recordings of textile machines fetched from the nearby museum, letting these pre-recorded tapes echo inside the metal gas chamber. Müller “responds” to these sounds with his improvising sax; and then in the second half, the whole thing is reprocessed and replayed, this time with Müller’s theremin additions. It’s a fantastic instance of audio entropy…through this re-recording and playback, Fiebig appears to be making some very poignant point about industrial decay, and something he calls the “virtual future of digital production”.

Quite often, generic industrial music has used the factory as an all-encompassing metaphor for any kind of brutalising anti-human action, and aimed to emulate metallic machine-like sounds in any way possible. A sweeping generalisation perhaps, but you get the idea. Gerald Fiebig’s Gasworks, by contrast, is completely based in reality, not founded on some dystopian fantasy of the future, and his global politics are as savvy as the artworks he makes. There is no need for his work to emulate anything; he’s more wedded to producing documentary truths about machines, industry, and the buildings used for these purposes. The mood and tone is still pessimistic, and this is reflected in the rather grim and stark sound of the record, but this is an important work of art. From 28th March 2019.