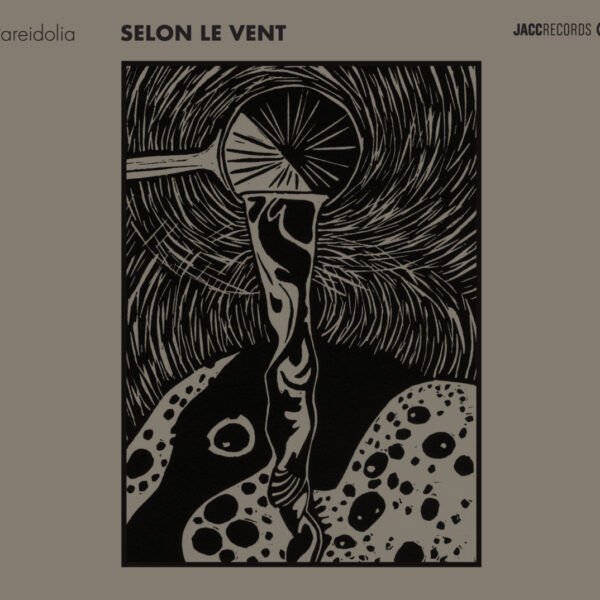 Welcome return of Portuguese viola player João Camões on Selon Le Vent (JACC RECORDS JR035), where he’s one part of an improvising threesome who calls themselves Pareidolia. French player Gabriel Lemair is on saxophones and clarinet, and fellow Frenchman Yves Arques is behind the piano. On the first long track ‘Himmelskino’, the three of them display virtually zero interest in conventional jazz moves, taking solos, or any of the usual dynamics; instead, the aim appears to be to create an intense atmosphere, through production of highly unusual effects. Nary a recognisable sound from these three acoustic instruments. Among the modes at their disposals, there’s a good deal of frenetic “rubbing” activity, which is especially affecting when Camões fiddles a mournful abstract plaint while Arques applies his palms to the lid of the baby grand and strokes and knocks percussively. Then there’s the sorrowful attenuated drones – Lemair in particular has a strong line in coaxing whimpers and mews from his bell with a good deal of restraint. Also of note is a particularly juicy effect towards the end, combining breathy tones and sighs with unearthly creaks from the string section, for the listener not unlike being aboard a ghost ship.

On ‘Herzinko’, we add double bassist Alvaro Rosso from Uruguay. At once the music takes quite a different path when this Latino steps onto the stand. More agitated, less contemplative; and even somewhat more “musical”, especially in the opening moments, where the bass and viola are creating an instant composition on the spot as much as they fight a friendly battle of the strings. Both piano and saxophone add dramatic and dynamic contributions of their own to this lively set; the piano striking minimal dark chords like punctuation marks, the saxophone chiming in with judicious interjections (although I don’t like Lemair as much when he starts inventing florid and excessive trills, like a bad version of Ornette). My personal preference is for the first track here – less is more – and the music is much more exploratory and questioning, less about confirming a pre-determined answer. But the performers are all strong players, and Selon Le Vent can be seen as an exemplary piece of contemporary improvisation. Inês Cóias did the linocut illustrations for the covers. From 22nd March 2019.