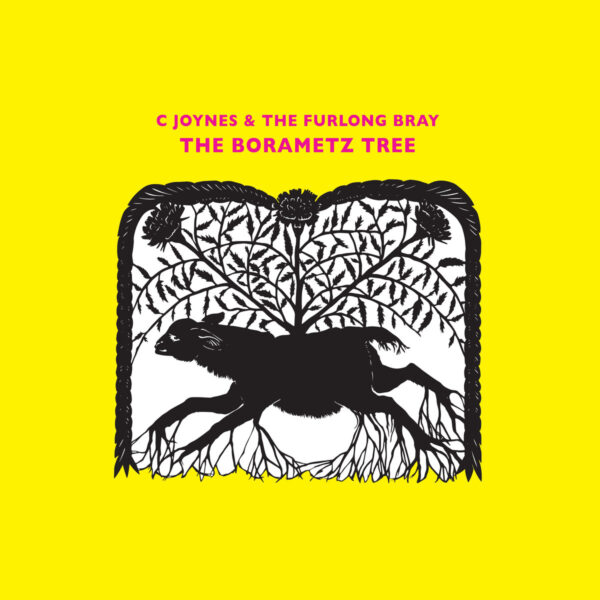 C Joynes is a personal all-time favourite of English guitar music and he could do no wrong for me. We haven’t heard from him in these pages since 2016’s Split Electric for Thread Recordings which he made with fellow guitar instrumentalist Nick Jonah Davis (who has also been represented by Thread, on his House Of Dragons solo LP). Davis is here today on The Borametz Tree (THREAD RECORDINGS THR006), an LP credited to C Joynes & The Furlong Bray, an imaginary ad-hoc group which also includes the Dead Rat Orchestra and Cam Deas. When I first experienced the work of Joynes, I was not only bowled over by the music (and his very precise guitar playing style), but also the depth of knowledge he had about the history of English folk music, and indeed elements of pagan legends about the landscape and animal magic that may or may not have fed into certain strains of this island’s best folk songs (I’m thinking now of the annotations to God Feeds The Ravens, from 2006).

Well, the English folk strains are still here, but so is a lot of other stuff, in particular influences and rhythms from (I presume) African music, a field about which I know less than zero, but I’m picking up hints from the press release, a tune title such as ‘Librarie Du Maghreb’, and mostly the lilting rhythms that Joynes and his crew execute with such zest and enthusiasm, and make it all seem so natural and effortless. More to the point, Joynes has somehow managed to knit together the African and English strands into a new tapestry of delight which shines anew with colour and joy. It’s much to his credit – and that of Deas, Davis, and the three Dead Rats – that this can be done without any self-conscious attempt at popularising roots music in a way that has caused well-intentioned projects like WOMAD, for example, to stumble. All the music on The Borametz Tree is just delightful, moving and joyous, and played with flawless craft and skill by musicians who evidently do this for the sheer love of playing. It’s both incredibly innovative and modern and yet remains true to the history and core meanings of traditional music forms. I think a lot of this is due to the personality of Joynes himself, an incredibly empowering and approachable fellow with a tremendous amount of knowledge and ability, yet also one of the most modest and unassuming people I’ve met.

Probably one of the best LPs you could buy this year, but move fast – this one has been co-released with Feeding Tube Records in the US, and copies are vanishing. Arrived 28th March 2019.