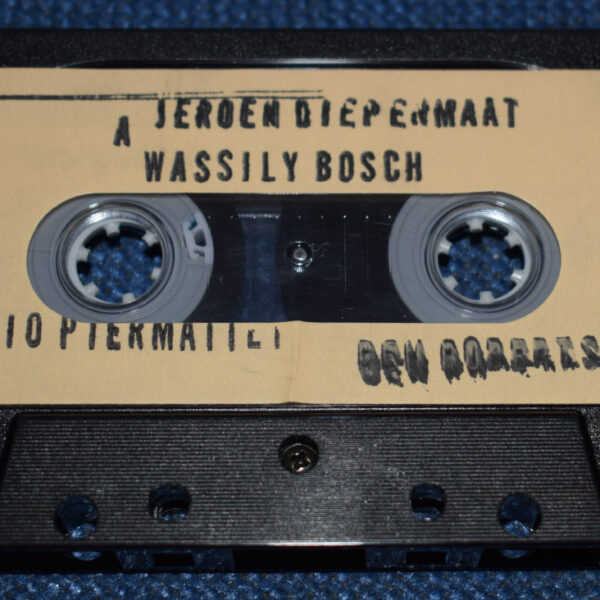 Rinus van Alebeek describes Kantoor (STAALTAPE) as something of a new direction, or a departure – I forget the exact words, and now I’ve mislaid his enclosed letter. Unlike previous entries in his Staaltape catalogue, it’s a zine and a tape package. The booklet was produced and printed by Petrichor Deventer using old-school printing equipment, while the tape portion was dubbed onto used C90s by Rinus. The cassette shell is bound into the booklet ingeniously; it makes reading the booklet quite awkward, and doesn’t exactly make the tape very accessible either. Martin Knaapen did the layout and design for this unusual package.

Recycling old cassettes is very apt, since Kantoor appears to have been compiled entirely from found tapes. This is not quite the same thing as straight field recording, even if some of the entries have the feel of a field recording. The artistes in question evidently have form when it comes to finding, purchasing, hoarding and storing these objects, whether picked up from charity shops, online auctions, or simply found in the street. Many have been entranced by the effluvia of the past, containing voices and sounds unfamiliar to us; Mark Vernon has pretty much made a whole career out of it. The contributors to Kantoor are Jeroen Diepenmaat, Wassily Bosch, Ezio Piermattei and Ben Roberts. There’s also printed texts by Rinus, and Giada dalla Bonta. Ezio Piermattei is the highly unusual Italian genius whose approach to tape assembly is pure magic to me, with unbelievable end results; however, he’s not exactly called on to exercise that skill here. His found tape collection sounds impressive, going by the brief descriptions printed here; every find has a story behind it, and he remembers where and when he picked up the item. Ben Roberts is the English creator who unsettled us with Unit Audio, which he made for this same label. He devotes his section of the booklet to some profound observations about the nature and meaning of old tapes as part of history; his pessimistic world view indicates that we don’t learn anything from studying the past.

I’ve enjoyed most entries in the Staaltape catalogue, but find myself perplexed and bored by Kantoor. Rinus has forsaken his usual editorial style which allowed each tape to act as a miasma, a veil of surreal beauty across a strange and mysterious world; meaning would gradually leak out. Here, there’s very little mystery or beauty, just raw sounds; and the presentation makes everything appear as a near-meaningless jumble. Conversations in foreign languages, unseen events; what is going on? Some of the recordings are so banal it’s beyond belief; I’m just not feeling the sublimation, if there’s any to be had. I fully appreciate these are fragmented torn-up postcards from the past, but the real lives they represent are losing something in translation; not enough life is making its way across to the other side of the oxide. There are still many striking and poignant aural moments on offer, but for the most part I’m feeling restless and alienated.

The abiding sense of futility is not exactly lightened the more I read of the booklet texts. Most of them are saying that life is a meaningless succession of random events, and these tapes mostly mean nothing. Admittedly Ben Roberts takes a different tack, with his moralising sermon about a history of brutality and human rights violations. And Piermattei, with his elegant catalogue of finds, seems to be admitting that everything is random and we can’t understand anything, but he also seems to be saying it doesn’t really matter. Van Alebeek’s preface starts with promises of a new life, which are quickly revealed to be the same old life repeating itself; he warns us that we all grow old; and the act of playing the cassette tape itself is a metaphor for this process. “Your life is a tape that gets entangled in the machinery of the cassette player,” he writes poignantly, “Get it out, careful.”