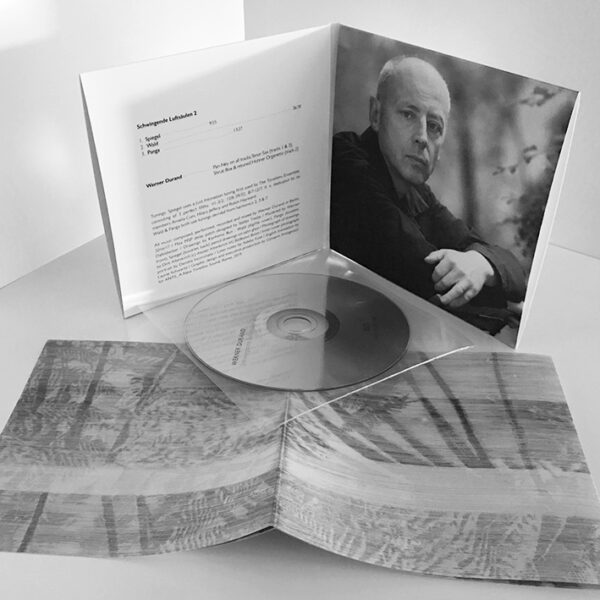 Werner Durand is the puffing German innovator who plays his own modified pipe, which he calls the Pan-Ney, last heard by us on his 2018 release Schwingende Luftsäulen. He’s here today with the follow-up record Schwingende Luftsäulen 2 (ANTS RECORDS AG19), three more examples of his unique craft and explicitly designed to follow where Volume 1 left off. It’s this modified pan-pipe which dominates the set, although he accompanies himself with the tenor saxophone on two tracks, and with a droning Shruti box and keyboard on the long track ‘Wald’. As previously, the press notes (by Adelio Fusé) stress Durand’s connections to formal minimal composed music – La Monte Young, Phill Niblock, Eliane Radigue and Tony Conrad are all name-checked – and also identifies him as a musician with an ethnological soul, proposing that in this simple music we can hear echoes of musical culture from around the world, and from all periods dating back to ancient times. What I might add to this is that Werner Durand could be placed in a line with other Minimalist musicians who are the living embodiment of their own compositions – they personally are best placed to deliver the optimal performance of them – I’m thinking now of Charlemagne Palestine, Terry Riley, Tony Conrad, and Pauline Oliveros. One might include Niblock in that list, as he has very specific ideas about performance is (it’s usually playback of recordings on his own system in his own apartment).

We’re directed to pay special attention to ‘Wald’, which assumes the form of music for a primitive dance ritual, and connects to the ancient mythologies and folklore of the forest. It’s these resonant forest themes which are reflected in the minimal, sketchy artwork for the covers, which suggest an ancient vision of a primordial forest somehow being beamed to us in flickering images across a primitive black-and-white time viewing portal. Musically, this ‘Wald’ piece follows a very simple structure – the Shruti box and the retuned Hohner organetto hold down a steady drone, while the Pan-Ney executes the rhythmic dancing patterns on top of it. As we’re led through numerous subtle variations and tonal changes across 36 minutes, the music creates a captivating trance with these mesmerising methods. We should also mention the Just Intonation tuning – another nod to a well-known Minimalist trope – which obtains on ‘Spiegel’. Werner Durand describes this tuning as “consisting of 3 perfect fifths”, and he borrowed it from a group called The Tonaliens Ensemble who first used it (Robin Hayward is a member). The other two pieces also use special tunings. I mention this to emphasize that this music, which can appear wispy and insubstantial on the surface, is actually adhering to very precise rules and musical parameters, and that every moment of it is designed and executed with a certain amount of compositional rigour.

Summa: innovative musical instrument design, played by a very focussed and strong-willed inventor, embodying theories of composition and performance practice, in the service of music that connects to the history of Minimalism and can be located in pan-international traditional musics both ancient and modern. How many packages give you all that? From 8th April 2019.