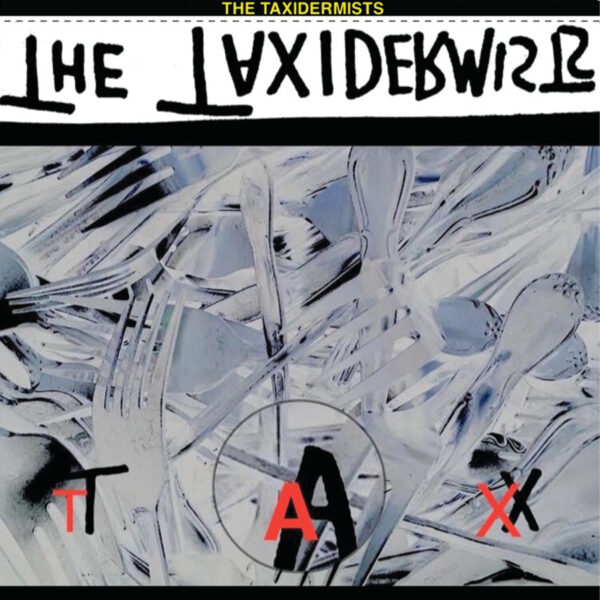 The Taxidermists are a Massachusetts duo comprising Cooper Handy (guitar, vocals) and Salvadore McNamara (drums), playing their own brand of angular avant-pop on Tax (FEEDING TUBE RECORDS FTR456). Apparently this is only their second LP, yet here they are exuding confidence and bravado on these short and punchy songs, played with spare, no-nonsense energy. It’s certainly refreshing to hear a band who know how to keep a song under three minutes, and in some cases under the coveted two-minute mark (a benchmark normally held by world champion Bo Diddley).

The basic, no-frills sound of The Taxidermists is excellent, just guitar-vox-drum with no pedal effects that I can make out, certainly no over-amplification or distortion; they act and move like a 1964 garage combo, as though they lived in a world where Jimi Hendrix didn’t exist (indeed, a world where stone-free soloing and wah-wah pedal use were considered to be a bad idea) and The Jam had been elected rulers of the free world. I like the shrill, pared-down tone of both band and songs, and even find pleasure in the slightly hectoring tone of Handy’s strident voice; it’s more like being given a lecture, or a warning, than hearing a song.

The only drawback for me is the lack of decent song construction. Hitting that three-minute mark is good, but not enough; just feels like there are too many chord changes for the sake of it, too much wilful discordancy, too many self-consciously odd guitar moves. Each performance borders on being mannered, affected; if they could maybe cut loose with a version of ‘Psychotic Reaction’, or revisit highlights from the Kenny and The Kasuals catalogue, I’d award them five stars. A strong effort though; will watch out for more from this talented pair. From 2nd July 2019.