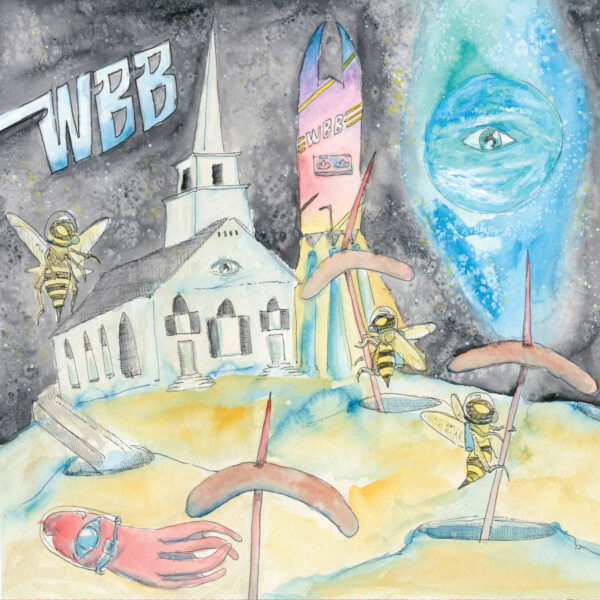 From Feeding Tube Records, we have the second LP by Weeping Bong Band called simply II (FEEDING TUBE RECORDS FTR448); this is a combo from Western Mass and a showcase for the talents of Anthony Pasquarosa joined by members of The Pigeons and The Sea Donkeys, plus PG Six who used to appear on some fine records by The Tower Recordings. Anthony Pasquarosa scorched my slippers with his Burnt Envelope LP, but today’s laid-back tripster album is a million miles away from that abrasive punk-styled beast. The very name Weeping Bong Band implies something about drug intake, and indeed the album is far more of a psychedelic stoner of a record than many original artefacts from the time of 1969 to 1974.

I like the mode of playing of these five Americans, which appears to be incredibly simple and spaced out, setting out basic drones with use of synths or echo, and allowing stringed instruments (maybe banjo, guitar) to gently utter cosmic wisdoms from beyond the ionosphere. This is emphatically not the same as “soloing”, a condition which has blighted many a potentially good record of psychedelic swarm-juice, and 90% of the time turns out to be a euphemism for excessive and egotistical playing, producing too many notes and clogging up the joint. By contrast, the Weepsters are all about staying in the zone through very slow, deliberative movements.

This is fine with me and I would probably enjoy this “trippy” item if the actual chords, notes and melodies produced weren’t so obvious and well-worn – I’d like the players to exert themselves a little more instead of just coming up with these unadventurous inventions in the key of C. Even so, there’s a friendly vibe and warmth here which is not unpleasant to experience. From 27 June 2019.