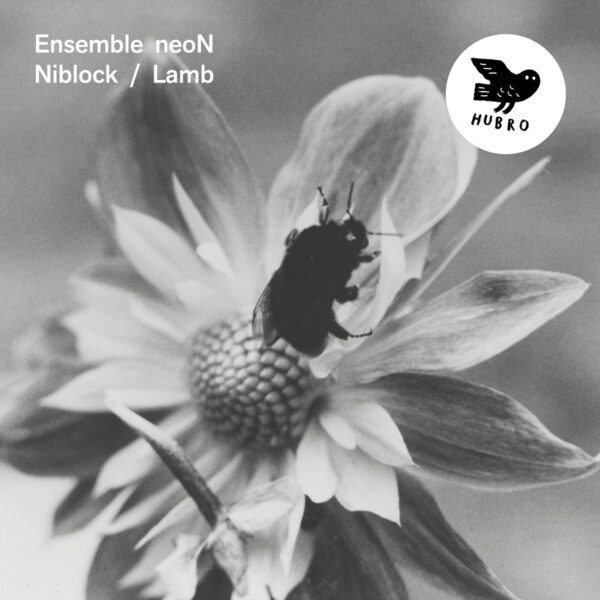 Very good to hear the return of Ensemble neoN, the Norwegian modernist players who impressed us in 2017 with their self-titled debut for the Aurora label. I believe the group was formed in 2008 by Jan Martin Smørdal and Julian Skar and the membership may be drawn from the Norwegian Academy of Music. If you own that disc, you’ll recall they played Alvin Lucier as one of their showcase pieces, and I mention this because on today’s record, Niblock / Lamb (HUBRO HUBROCD2601), it’s the turn of another “high master” of American minimalism, Phill Niblock. They perform ‘To Two Tea Roses’ as just an eight-piece, yet set up a huge and quite powerful wall of almighty drone, which we could liken to experiencing a tidal wave in slow motion.

It’s all done with acoustic instruments. An especially nice touch is the bowed vibraphone of Ane Marthe Sorlien Holen, an instrument whose metallic ring sometimes emerges like a copper penny from this gaseous cloud of competing frequencies; and the two pianos, played by Heloisa Amarai and Magnus Loddgard, whose lower-register notes (if indeed that’s what are being played) are all but dissolved in the greater whole. The rest of the sound is carried by woodwinds (mostly) and two strings; from what I recall of Niblock’s records, he was keen on long sustained notes from saxophones and trombones, whenever available. I like Ensemble neoN’s take on Niblock; they seem amenable to opening up the space a little, rather than producing large, flat blocks of colour-field painting in sound; and the ever-shifting timbral changes within this drone make for compelling listening. We’re invited in the press notes to listen out of “concert-hall reverb”, which I suppose is the walls of the performance arena bouncing back the sound onto the recording and adding to what is already a packed, very full, block of noise. There’s also references to interplay between live performance and pre-records, which intrigues me, but I see no further mention of tape playback in the booklet notes.

At all times, ‘To Two Tea Roses’ exudes a stern mood, one as if setting the stage for matters of great import; I feel like the judge of the Universe is about to enter the star chamber (but he never does). For a less fanciful annotation to the piece, I direct you to Niblock’s printed statement inside the booklet, which explains about the roses in the context of Walter Branchi, the Italian composer to whom this piece is dedicated.

On to second piece. Catherine Lamb composed ‘Parallaxis Forma’. She’s some thirty years younger than Niblock. Last noted her esteemed name when she provided explanatory notes for Six Moving Guitars by Fredrik Rasten on the Sofa label. Can’t say I’m massively au fait with her work, but this Parallaxis Forma is a good starting point for my lumpen ears. I’m also oddly taken with her printed notes in the booklet for this one. Her description / conception of her music is framed in terms that are quite outside conventional music it seems. She speaks with some precision and authority about the perception of very small (imperceptible) events, and often uses terms and images you’d expect to hear in the mouth of a watercolour painter or printmaker – “blurred form”, “a kind of wash”, “lines are distinct”. At the same time she proposes “unfoldings” and “trajectories” in her work, which for some reason makes me think of a cross between Origami and a pupae suspended in a white space, while being directed by an architect.

The music on this occasion is again played by a small number of players, and the most prominent sound is the humming / droning voices of Stine Janvin Motland (a guest player) and Silje Aker Johnsen, though there’s also Jennifer Torrence playing her wine glasses. Yes, an extremely gentle piece, and the programming is quite deliberate; it’s meant to contrast quite sharply with the full-bodied roar of the Niblock. If ‘To Two Tea Roses’ is like sitting waiting for the Last Judgement, then ‘Parallaxis Forma’ is like the calm that follows – except it’s more like a sorrowful state of resignedness, of accepting the essential tragedy of the world and its numberless souls. This Lamb has an icy beauty, yet it doesn’t quite offer a soothing balm to the troubled soul, rather it keeps worrying away at our troubles with a keening sense of rue.

The players allude to the challenges of playing these two works. It seems that performing Niblock requires a deal of “physical effort”, and they make it seem like something almost painful – once it’s started the vortex of sound cannot stop until completed. For Lamb, the effort is mostly about listening to the other musicians, because the tones produced are incredibly unusual, and they aren’t scored in the conventional sense. Bear this in mind as you listen; you may think it’s very easy to produce such “simple” music. But it’s not; besides the talent, craft, and skill, there’s a lot of good old-fashioned effort and exertion. Full marks for this one. From 15 June 2019.