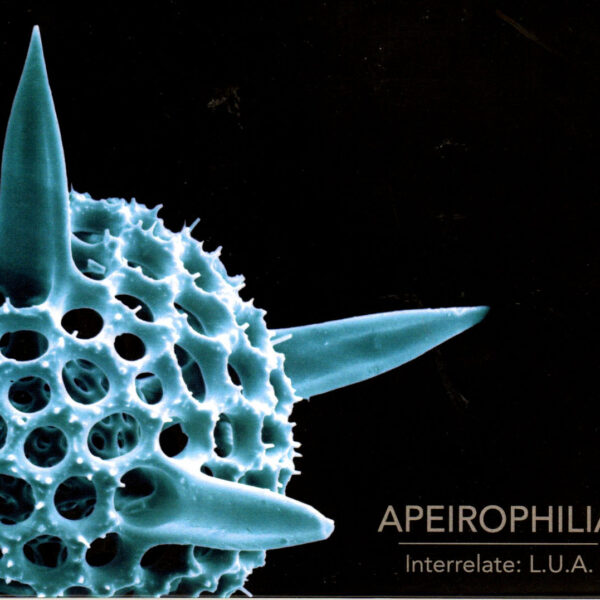 Enjoyable instrumental rock music from Genoa in the form of band calling themselves Apeirophilia. On Interrelate: L.U.A. (NO LABEL) the guitarist Cristiano Olivari is backed by bassist Giovanni Marchi and drummer Leonardo Caourro, and this is their debut EP. One of their aims is to make music that sounds approachable, user-friendly, and easy on the ear; they’ve succeeded in that, without ending up with the sort of blandness and non-melodies that we’re hearing a lot lately from most ambient and electronica acts. Might be that playing guitars has something to do with that (though Apeirophilia do admit to some “light electronic elements”) and beneath the pleasing surface I do believe there’s some strong instrumental prowess at work, some real craft…plus they understand something about interplay and dynamics, in case you were worried this was just a showcase for guitar solos. Somewhere these “complex ideas” of which they proudly boast are being smuggled in. This kind of “circular” playing – by which I mean they just keep going in a linear manner with short repeated phrases instead of structuring their music on the old four-beats to the bar grid or using well-worn blues changes – in places reminds me of The Grateful Dead, a band who were capable of doing this kind of noodly improv thing for long stretches of time, and reminds me of why I used to like The Dead (I certainly don’t say that all their records, or performances, are musical gold).

I’d have been happy to leave it at that, except we must mention the “concept” at play here. The acroynm L.U.A. unpacks into “last universal ancestor” and the music is something to do with scientific observations about microscopic organisms, in support of which the tracks titles are a bit clunky – ‘Genome’s Fractal Disposition’ is one of them – and there are photographs of protozoa on the cover provided by a professor of SEM photography. Well, it’s a little ambitious to want to start your musical career by exploring such matters on your first EP, but it doesn’t detract from your musical entertainment. If this be post-rock, I’ll gladly take it instead of the last round of bands to be tagged with that name (e.g. Labradford, Pan-American, Tortoise, and other such marshmallows). From 28 June 2019.