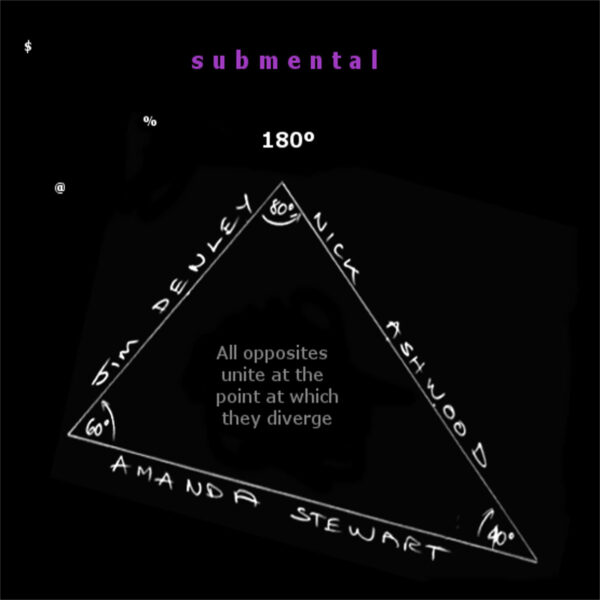 Voice and improvisation record by the trio 180°, all players from Australia…the flute player Jim Denley has surfaced from the lower depths before on his solo record Cut Air, which he made for the Sofa label. Worth re-reading Paul’s review for a useful summary of Denley’s CV and impressive roster of past work. He’s a bass flute specialist and that’s the instrument he plays here. There’s also Nick Ashwood on the acoustic guitar, and Amanda Stewart who writes texts and vocalises same in her own unique manner.

The record Submental (SPLITREC 29) offers eight examples of the musical approach they’ve been working on…I think the principal musical bond is between Ashwood and Denley, who have been collaborating for three years now, even though Nick resides in Tasmania (one of the hardest places in the continent to reach), and if we can characterise their method at all, it’s got something to do with unusual tunings and experimenting with timbres. Submental is an all-acoustic record, very discursive and non-specific…free-form atonalities and non-musical sounds are the key elements, and there’s plenty of space and open fields. It’s this space that Amanda Stewart makes use of, when the muse descends on her from a cloud…her vocal approach may be to murmur sentences in low tones, sometimes allowing one word in twenty to be understood, or to jabber in excited, emotional fashion. The latter method also tends to obscure meaning, or at any rate direct meaning…which is odd, as the project wishes to stress that she is a writer of poetry and texts. But she’s evolved her own personal style of delivery, which is labelled “extended language”, and it appears to be based more on her studies in philosophy and linguistics rather than the work of Norma Winstone or Maggie Nichols.

Despite this rather obscurantist angle, something is communicated nonetheless – it’s still possible to come away from hearing Submental with the feeling one has been read a 50pp academic paper, or attended a three-day series of lectures in media studies. Even the title Submental refers to the linguistic dimension; they use the term in a strict anatomical sense, referring to that specific area of the human frame that lies below the chin. Not content with that, our three Australians have been intrigued by the suprahyoid triangle of the human neck – to the extent that all the tracks are named after geometric triangular shapes, and, just in case it wasn’t clearly understood, a triangle is drawn in chalk for the cover art.

While they do have a penchant for contextualising their ideas with two-dollar words over-much for my liking – phrases such as “the formulation of the subject and the apprehension of interdetermination” are printed all over the cover – the record remains compelling…understated, yet very rich in content. From 12 July 2019.