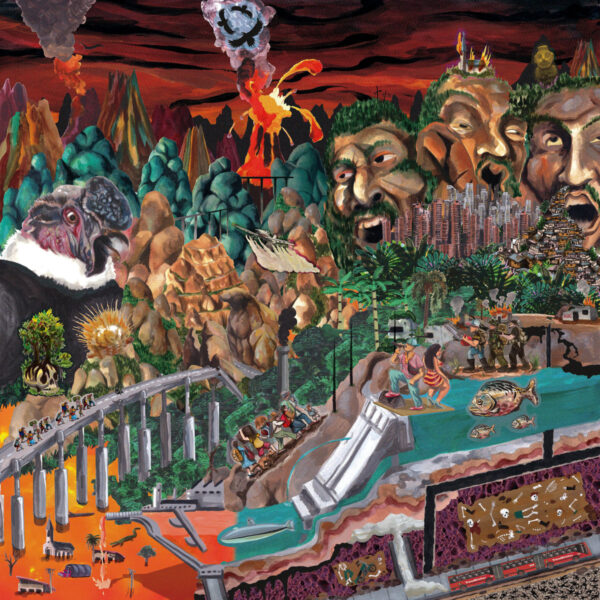 It’s a bit perverse really, when it requires a computer and some state of the art recording technology to time shift us back to the days of tinny-sounding transistor radios, the space race and minis (driven or worn…) But that’s really what Colombian instrumental trio Los Pirañas have effortlessly conveyed in the span of their three album/ten year history. A form of retro-futurism based on many years of this trio enthusiastically embracing music from their own backyard like Cumbia and Champeta and those from nearby neighbours such as Tropicalia and Salsa.

And naturally, since originally meeting in high school, guitarist Eblis Alvarez (also a Meridian Brother), bassist Mario Galeano and drummer Pedro Ojeda wouldn’t be the fervent musicologists they are without casting their collective gaze westwards to shoehorn elements of psychedelia, modern jazz and minimalist dub-scaping into their ever expanding universe. Any novelty aspects that this somewhat unusual marriage of genres is quickly dispelled with this live recording. It’s pretty apparent from the onset that there’s a full scale guitar jamboree taking place in front of us. Out goes the fancy dan fret-boarding and in comes umpteen shades of rhythmic invention and a wide spectrum of tonal colours, bolstered by the aforementioned presence of sundry items of digital tech. All the while, the mazy runs and ultra-tricksy manoeuvres of “Historia…” finds the trio sticking to each other like limpets wearing Velcro suits. With reverb in excess, space has to be the inevitable destination for “Llanero Soledeño”. Here Pedro’s multi-directional pot’n’pans rattle-a-thon being much like an impromptu session from the kitchen area of Joe Meek’s studio set-up. Being redolent of indigenous folk themes, meanwhile, “Todos Tenemos Hogar” is perhaps the most traditionalist piece on show. But that certainly can’t be said of “Infame Golpazo”; a South American counterpart to Gerry Anderson’s “Stingray” theme, where “anything can happen in the next half hour!!”. In this surprise twist, Troy Tempest and Surface agent X-2-Zero forget their past differences and let their hair down in the nearest available swingin’ puppet bar.

While travelling backwards at a steady rate, this trio clearly show that retro-futurism is surely the way forward, erm, as it were.