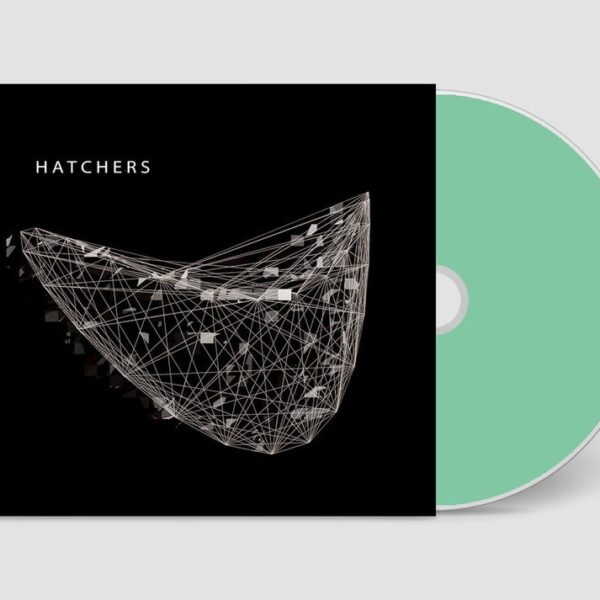 Brian Osborne has been heard around here in connection with numerous Dan Peck projects – it so happens he drums in The Gate, our favourite NY combo who effortlessly combine the best elements of sludge rock, doom and acoustic free improvisation in one highly entertaining package of Black Menace. Osborne also runs the Philly label Heat Retention Records, who have co-released some of Peck’s Tubapede cassettes. Osborne is also one half of Hatchers with the electronics fellow Michael Roy Barker (also plays in Embarker and Sharks With Wings), and it’s a great pleasure to hear their Spectral Lines (HEAT RETENTION RECORDS / SENDHELP NO NUMBER) album even if it is an “old” one from 2018.

Barker produces the kind of abrasive, sullen noise that crumbles my cake and allows me to go scuba-diving with the gorilla people from Asteroid X in the ancient ocean of lava. He’s quite some way from the attention-grabbing school of Wolf Eyes and related noisesters, if indeed that mode of playing still holds sway in the US; I mean the kind of playing that’s full of shocks and surprises in among the surly thugster growls, and unlike these Barker isn’t necessarily interested in giving the listener heart failure. It is a relief to make it to the end of an album without having to phone for an ambulance. Osborne meanwhile is mainly committed to a high-energy style of drumming for the most part on Spectral Lines, meaning the music soars with the majestic energy of a Minuteman thermo-nuclear missile on its way to wipe out half of the Eastern bloc. Indeed in places this is drumming that wouldn’t feel out of place on a Cecil Taylor record, so intense and dynamic it be. This undoubtedly reflects on the fact that Osborne did study under Milford Graves for many years. 1

Since we’re speaking about a sense of relief, it’s also nice for me to hear a drummer in an avant-noise improv context who isn’t interested in doing the endless bowed cymbals thing for 90 minutes at a stretch, which means that Spectral Lines is a lively and invigorating listen instead of a bundle of lethargic snail emissions guaranteed to put you to sleep. Presented in a simple package without much foo-fa-rah, this is nonetheless an intense and exciting release.

In same envelope, a solo percussion record by Brian Osborne called Decorous Novelties (HRR 041). This is presented in the kind of cover that might raise expectations for a Cold / Depressive Black Metal item fit for wandering across the moors in January, but instead turns out to be 12 experiments in restrained, exploratory percussive work…Osborne seems intent on applying sticks, mallets and brushes to anything he can find in the house that isn’t nailed down, including bowls, pipes, cutlery and other kitchen utensils, tools from the workshop, and (inevitably) pieces of scrap metal. Not a noise record, not a high-energy record like the above, and (thankfully) not a conceptual composition influenced by Gamelan in the Philip Corner mode. Instead this record exhibits the player’s intuitive skills, his attention to detail, and his ability to wring interesting sounds from the most unpromising of materials. Intimate, well-crafted, and innovative. Both the above from 2nd September 2019.