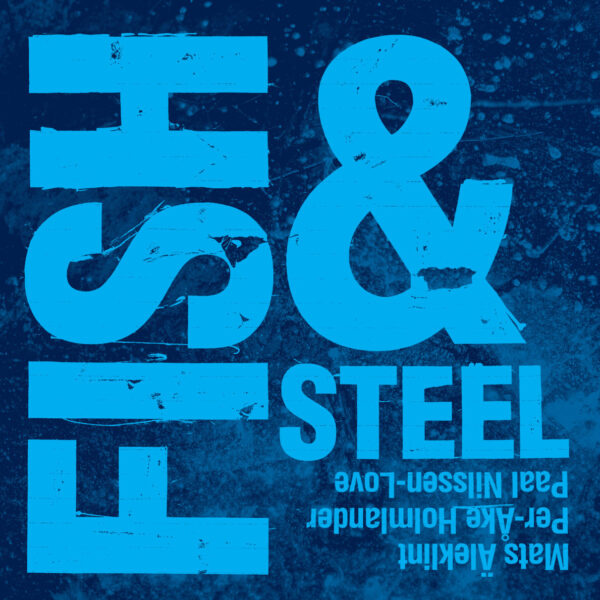 Two new items from Paal Nilssen-Love‘s label PNL Records…the first Fish & Steel (PNL044) features the insane Norwegian drummer indulging in two lengthy bash-ups of free noise of some sort, notable for featuring just two players as opposed to his usual overwhelming big-band affairs, such as Large Unit. The trombonist Mats Äleklint and the Swedish tuba player Per-Åke Holmlander form a trio where the unholy combination of blown-bass and rattling drums is sufficient to generate enormous billows of strange racket that moves from one mood to another as restlessly as the weather on an extremely windy day. Now north, now south…how can a helmsman get a grip? Far too much open-face sandwich filling to digest in one sitting on this generous disc, but both segments from this live concert at Kafe Haerverk offer much in the way of rollicking tumbling fun, a kind of loud and brash circus-jazz with performing animals, clowns, and trapeze artists all competing for your attention in the ring. The name of the first track ‘Blow Out’ is what makes me think of a horrible feasting session where we’re invited to eat ourselves to death – much like in La Grand Bouffe, a 1973 French-Italian satire movie which I’ve never seen, but which evidently delivers a grotesque warning against the perils of gluttony and excess. No denying the high energy and continual forward-movement of these Nilssen-Love projects, but they can be exhausting and leave the listener very little room to themselves. Extroverted blattery by the pound…

More enjoyable to one of my sensibility is Song For The Big Chief (PNL046), featuring the major free jazz talent Joe McPhee playing with Paal Nilssen-Love. McPhee seems to be everyone’s favourite free jazzist just now and is is enjoying something of a purple patch, which can only be a good thing…his Hat Hut 1970s recordings are hard to beat, and it’s grand to see the reissue and celebration of his 1971 debut Nation Time, perhaps finally reaching the ears of the world who are ready for such a radical free music statement. In my ignorance, I had no idea McPhee had been touring and recording with Paal since 2002 (although I may have been vaguely aware of The Thing project), and that there’s a substantial 7-disc set called Candy which captures most of what they laid down for the seven years before 2014.

This particular item is intended as an explicit tribute to Sunny Murray, another towering free jazz player who drummed with Cecil Taylor and unleashed some of the more experimental music items on ESP-Disk in the 1960s. Murray’s death happened to coincide with the date of this duo concert at Cafe Oto in 2017, and the opening track ‘Song For The Big Chief (Old Man River)’ offers a mix of emotions by way of dealing with this major loss to free music – howls of pain, pent-up anger, yet also lots of upbeat joyous explosions of flailing energy. McPhee is given plenty of time and space for his unique tone to really blast forth; the Swedish-Norwegian brassmen noted above have the style, the force, but they lack that tone of voice. At times, McPhee’s sound seems positively twisted, as if unable to bring forth the requisite shapes and openings that are required to utter these semi-ugly blobs of music.

This 23-minute ‘Big Chief’ is the main body-slammer here, but there’s much to be said for ‘Knox’ which saunters down a bluesy alleyway with a strange mix of swagger and despair in its swing-inflected rhythms. It’s astounding to me how much sheer attitude McPhee is able to carry through the bell of that tenor sax. The closer ‘A Fantasy For Lester’ may or may not be a title that’s intended to tip the trilby to Lester Young, but in fact it’s the most outright experimental of the set, eight minutes of unearthly squall which I think is emerging from McPhee’s playing of the pocket trumpet (an instrument made famous by Don Cherry). This one must have left the London audience pretty awe-struck; at times sounding more like it was produced by an analogue synth or a wayward circuit-bent box, the utter eerieness of it is enough to summon spirits from the past. In all, a pretty damn essential slab.