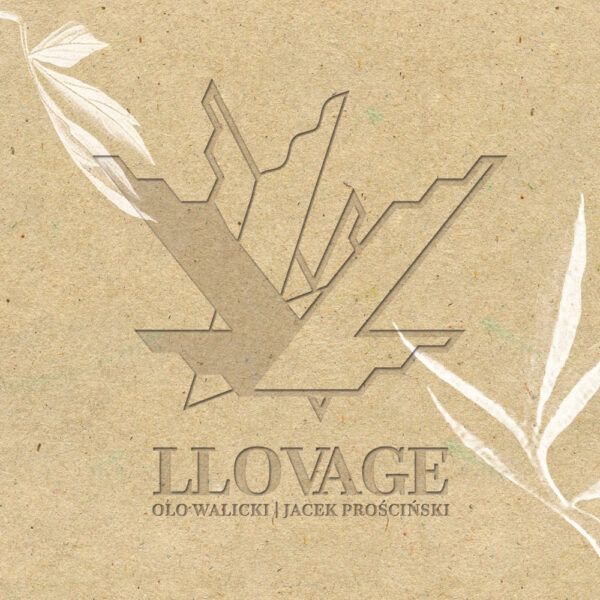 The Polish label Gusstaff rarely brings us anything less than interesting and unusual music, and I’ve often associated it with tasty bludgeon-rock such as the raucuous records by Prochno and Ciastko. Today’s offering isn’t in that bag though, and instead it’s an electro-acoustic oddity called Llovage (GUSSTAFF RECORDS GRAM1908CD), created and performed by Olo Walicki and Jacek Proscinski. They do it by playing an upright double bass and drums in real time, adding electronic music and occasional samples to the music. Those sampled include the singer Kira Boreczki-Dal and the instrumentalist Mikolaj Trzasaka.

The twosome appear to have been honing their craft for some time now, as they would put it “working out their own language of sound communication”, and come into it from backgrounds involving drama, literature, music theory, and radio plays. Although this record is a 100% studio concoction, they were preparing in October 2019 to make their live debut at a jazz festival. While you might be able to hear elements of jazz in their unusual music, you could also hear traces of many other genres and influences. In method, the idea of putting samples on top of what is effectively an academic form of drum and bass music gives this album a certain accessibility, but the way this pair operate will keep you guessing, as they sidestep just about every obvious move you could imagine. One moment the music is upbeat and entertaining, then it turns into something deeply melancholic and wistful. The innovation extends to the overall sound of the record, avoiding many ambient and electronica clichés.

All this said, Llovage doesn’t really manage to cut loose as often as one might expect, and too often the duo seem too restricted by the very rules they have set for themselves. I say this because there’s a certain preciousness in the whole project; for instance, they filmed everything in the studio with multiple cameras, and intend to release a full-length documentary of the work, so that an audience may savour every nuance of their musical exploits. I’m not really sure if the world is clamouring for such a movie, but there it is. From 27th September 2019.