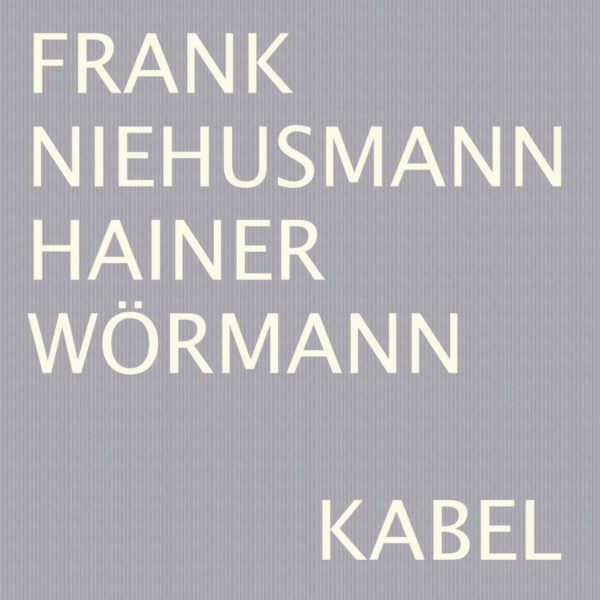 From the German label Nurnichtnur we have the Kabel (NURNICHTNUR 118 22 09) album, made by guitarist Hainer Wörmann and composer Frank Niehusmann. They performed the music in Bremen in 2017 and the resulting album has been mixed down from that set, which they describe as “improvised, contemporary, electroacoustic music”. It’s an exhausting listen…plenty of frenetic activity on offer and hardly a breathing space in these quite short but very energetic pieces. Hainer Wörmann’s guitar style is a real case of not leaving well enough alone – he’s a real believer in “extended technique”, and will use anything he can get his hands on to play his guitar with, and the list of cutlery and foreign objects in his arsenal is enough to give heart failure to any guitar maker. Wörmann likes “mechanical” preparations, which may be something even more radical than applying small motors to his strings; perhaps he’s trying to efface all traces of humanity from his work. At any rate, the sound that emerges from his tortured instrument is quite alien, and only intermittently resembles the noise a normal guitar makes. What we could add to this is his preference for very short, clipped, phrases, as though he were a robot who only speaks in single consonants at a time and expects us to make them into coherent sentences. Scrabbly, disjointed texture-heavy gestures are the end result, flying into the air at tremendous speed.

Frank Niehusmann is a serious electronic composer. Active since 1978, he hasn’t issued that much solo work under his own name until 1994’s Heimat & Antarktis, but his work has been distributed outside the usual record label arena, appearing on TV shows, live concerts, installations, and mixed-media happenings. I’m particularly interested to learn he did sounds for radio broadcasts about art and science. On this Kabel record though, he’s thrown himself into live improvising performance using a computerised set-up, a lot of which seems to consist of drum machines which spit out beats in an aggressive and startling fashion, along with the strange electronic sounds that he plays using software of his own design. Like Wörmann, he too favours “short tones and fast actions”, meaning that most of the fabric of Kabel is realised with splintered, mosaic-like playing, no phrases lingering around for very long before it’s replaced by the next stab of abrasive noise. There’s something to be said for the intensity of Kabel, and it’s refreshing to hear something with a spark of life, music that isn’t all about slow minimal droning. But for all the musical pyrotechnics and leaping about, the duo can’t seem to take us anywhere very interesting. I have the sense they’re too focused on their technique, to the point where every other gesture feels contrived or forced; they’re so intent on playing this way that they forget to engage the listener, and fail to create music that’s actually interesting or beautiful to listen to. From 23rd September 2019.