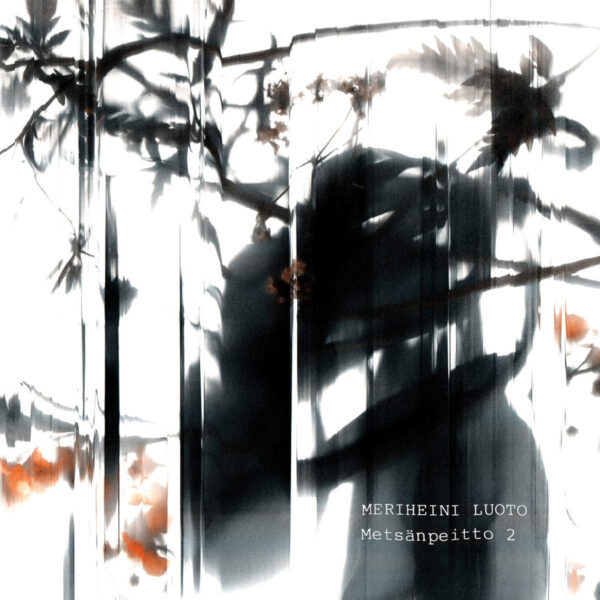 Beautiful minimal violin and voice piece from Meriheini Luoto on her Metsänpeitto 2 (LUOCD-02). You may recall we heard from this Finnish genius in 2017 with the first part of Metsänpeitto, and today’s record is a continuation. This time it might be worth stressing the meaning of “metsänpeitto”, which comes to us from Finnish folk mythology. Finnish folklore is extremely respectful towards the forest, and has evolved a number of specific words and phrases for activities in the forest (for instance the term “marjastaa” for picking berries). Metsänpeitto literally translates as the “forest blanket”, referring to a condition where the traveller becomes covered by the forest; it means you can get so absorbed that you end up lost in another dimension, or “transported into another reality”. This can be either a warning from the forest elves not to travel too far, or it can be a benign transformative experience; for the latter, it’s recommended that only the true seeker of wisdom venture this far, as it can be a means of finding out the true secrets of the forest; divine visions may be yours, you will start to see spirits, and (unlike some unwary ones) you will successfully find a way out of the metsänpeitto without suddenly finding that 50 years have passed in earthly time.

A lot of the motifs there are I suppose common to other forest-worshipping cultures, but it’s enticing to find specific words for the experience. Meriheini Luoto’s music, on this occasion, does more than simply allude to the condition, or describe it; it actually invokes the experience for the listener, so that you too can slip inside the forest blanket and go away with the fairies. The previous record was largely a solo record with occasional contributions from Pizzicato Drops Orchestra, Minna Koskenlahti and Mirva Soininen; but today’s record is an eight-piece collaboration, employing a small chamber ensemble of violinists and vocalists. There is spare percussion too, and some wooden whistles, but strings and voices are to the fore. Eerie, small and intimate sounds emanate from this group, recorded at a medieval church in Karjaa in 2019; once again the dummy head technique was used to get that astonishingly vivid, yet other-worldly, effect.

Meriheini Luoto is credited with composition and with “improvisational methods”; indeed all of her work is a combination of skills and knowledge, including very intuitive exploration of timbral qualities and her own private experiences, added to her compositional abilities and her understanding of Scandinavian folk music. The entire realisation of this work has been planned and executed as a deliberate sequel to the first record; the 2017 album expressed the “struggle” of being enveloped by the forest blanket, but by the time of Metsänpeitto 2, the transformation has already happened. This shift in the narrative is expressed by enlisting more players, and deploying them around the concert venue (e.g. placing them in balconies) so as to surround the audience with sound. In this way Luoto is striving to realise two distinct soundworlds, herself as the person undergoing the forest transformation, the other players providing the sounds of a rich forest backdrop scene. Cinematic, dramatic, and quite narrative in intent; all expressed in sound, yet invoking many strong visions for the listener. The work is a real testament to the power of Luoto’s imagination, and her craft in turning these ideas into composed and replayable works.

We look forward to the third stage of this work’s development, planned for April 2020; she wants to do it with an entire chamber orchestra. This, from 3rd October 2019.