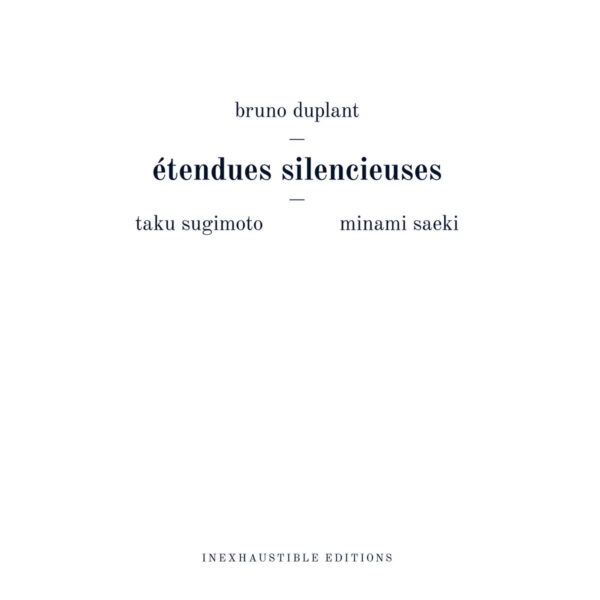 We’ve been hearing the music of Bruno Duplant on a few records since about 2016 now. One day I hope to understand it. To say he’s a minimalist would be to overstate the case…with each successive record that crosses the desk, there just seems to be less to listen to, and yet an increased expectation that we engage with the ideas (or the structure) of the composition, without being told very much about it. I’m ill-equipped to deal with this at the best of times, but I’ll happily wear the blindfold for another hour or two to see where I end up. It might also be fair to say Duplant has changed his methods a bit over time (the first record we got from him was rather ordinary electro-acoustic drone) and evolved into much more of an “indeterminate” composer, a word which I normally associate with John Cage and followers of his school. One day I hope to understand what it means. I think it’s a lot deeper, though, than simply allowing “chance events” to govern the rules of everything, which is the argument used by most detractors of the Cagean way.

At any rate, the word appears in context on today’s record Étendues Silencieuses (INEXHAUSTIBLE EDITIONS ie-018). The work is a composition in 11 parts by Bruno Duplant, and it’s played by the Japanese guitarist Taku Sugimoto and the vocalist Minami Saeki. Sugimoto is another figure with whom I have a complex relationship (meaning I can’t make up my mind) – we first came across his very reduced style of playing through the label A Bruit Secret, which during its short existence served to document quite a lot of the so-called “Onkyo” style of quiet, minimal, respectful music associated with Japanese players. That was as late as 2001; maybe I need to track down Taku’s earlier 1990s releases for the Slub label. Minami Saeki is an entirely new name to me. She comes to us from a background of acting, cinema, dancing and song, rather than a strictly free improvisation context, and she hasn’t appeared on record so much, although in 2017 there was a record called Songs she made with Taku.

When I first played Étendues Silencieuses I found it tough going and very unrewarding, but after a turn in the ice cold swimming pool and a jog around Hampstead Heath, I renewed my earmuffs for a second tranche of minimal emissions. At first spin these quiet, unobtrusive and uneventful murmurs could strike one as infuriating – barely audible guitar plucks, insubstantial vocal whimpers, and lots of interesting background noise coming into the recordings. This is because every piece was recorded in one of Tokyo’s outdoor parks. However, reading the printed paragraphs inside the cover revealed quite a bit and helped things fall into place. I read Minami’s take on it first, and she was all about using the composition as a cue to invent her own stories. She read the text as pictures, and from these images she devised scenarios, which would enable her to play roles or perform when it came time to do the recordings. Then I read Taku’s two paras. He’s all about the structure. He tells us that Étendues Silencieuses is 11 pages, and the pages are numbered and so the pieces appear in a sequence – just like the pages of a book. They recorded each page three times over (sometimes more). It emerges that the work can indeed be characterised as “indeterminate”, and that very word appears in Taku’s mouth three times. Evidently, it’s all about the way that the work gets interpreted by the artist it’s given to, a fact confirmed by Bruno himself whose short epithet indicates he is delighted by what these two orientals have done – they “played [it] like I expected”, quoth he, before going on to praise the creativity they brought to the performances. I’ve often felt this with Cage’s music, to be honest, which is probably why I like David Tudor so much; Tudor brought a lot of himself into these highly open-ended instructional pieces.

I’ll also mention however that the two players didn’t really discuss beforehand what they were going to do, and I’m not sure if they even mentioned it afterwards. To put it another way, Minami didn’t say she was going to start acting out stories, and Taku for his part is so committed to being indeterminate that he declines to describe his interpretation, because if he did then it wouldn’t be indeterminate any more. Bearing all this in mind put a fresh sheen of interest on this strange record for me. At some point it sounded like the two musicians were indeed playing together, instead of locking themselves up in their own thoughts, and what first appeared to be hesitancy and ineffectualness instead turns out to be a very disciplined form of subtlety, as if both concerned were reluctant to say or do any more than was necessary for fear of destroying something. In this context, the background sounds (including passing trains, I think) start to make a lot more sense too. Another strong release from this unpredictable Slovenian label, from 29th October 2019.