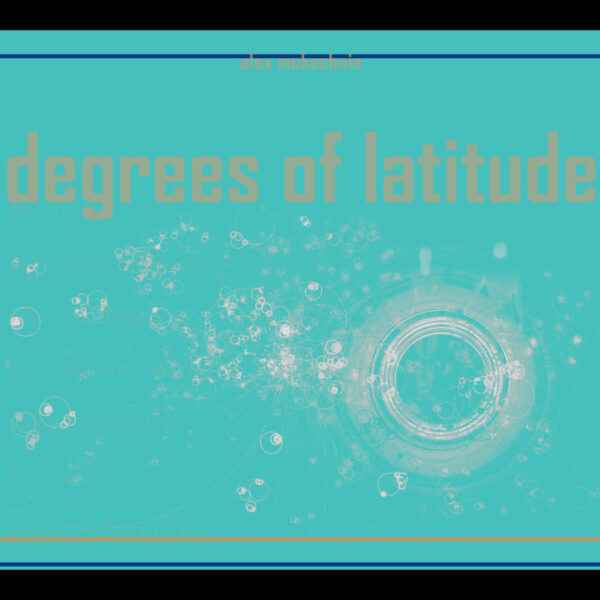 Alex McKechnie may be known to some readers as half of Barbed (with Alex Burrow) in the 1990s, when they made a form of electronic music described as “leftfield” by those in the know; actually I would be interested to hear their self-titled record which they made for These in 1994. There may also have been a brief connection with the band Add N To X, with whom both Alexes played for about one year, before that band signed to Mute with their loathsome formulaic approach to avant-garde electronica.

Before us today is a solo record by Alex McKechnie called Degrees Of Latitude (NO LABEL), which I gather is produced by a computer program which Alex wrote himself, in the C-sharp language (he has a day job at Weymouth College lecturing in digital arts). This program – not even named in the notes, as its creator seems oddly diffident about his accomplishments – evidently does its job in the composition and sequencing department, taking away much of the hard labour which I assume is attached to programming a synthesizer to play this way. It seems he turned to this method from a sense of personal dissatisfaction with the way that electronic music is generally produced just now; too much “modular jamming”, whatever that may entail. Alex wanted simplicity. Degrees Of Latitude is the result.

I’ve been trying hard to find more substance in it, especially since its creator evinces interest in serious composers like Xenakis and Laurie Spiegel (the American minimalist who’s been hot stuff ever since that 2-disc set came out on Unseen Worlds in 2012). But the record just strikes me as pleasant, unchallenging, wallpaper music. In its favour, Degrees Of Latitude is not just endless free-form droning, rather it’s fast-moving and quite complex arpeggiated runs of notes that evidently took some effort to construct, or at least can be reckoned as the fruit of much programming and coding. But they don’t really amount to satisfying melodies, in the way that the music of Steve Reich or Philip Glass does, and they just tinkle along merrily for 5-6 minutes at a time until they stop, leaving little impression behind. (24/10/2019)