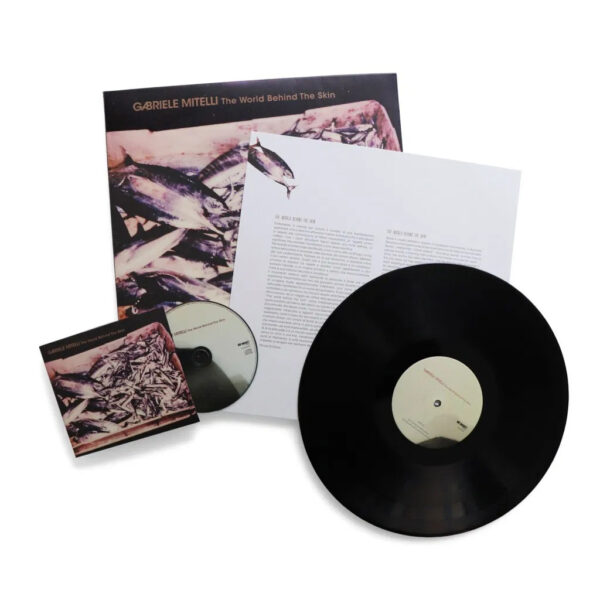 Interesting solo record is The World Behind The Skin (WE INSIST! RECORDS LPWEIN07) from Italian player Gabriele Mitelli, produced using the cornet, the soprano sax, the flugelhorn and his own voice…treated to some extent with electronics. Mitelli has been associated with the large Italian free jazz group Nexus for a time, is one half of the Groove & Move duo, and has also formed a connection with Rob Mazurek, the American larger-than-life player whose prolific outpourings do much to break down the silos of musical genres. Mitelli is gradually building up a line in solo releases, for instance the 2014 album Hymnus Ad Nocturnum, but this is the first we’ve heard from him.

Finding much to enjoy on The World Behind The Skin…the sound he makes is rich and enjoyable, often very inventive, using a variety of means to express his ideas, ranging from long-form drones to washed-out breathy tones, also chants, percussion, looping patterns, and occasional forays into free-form jazz-inflected blat. The electronic treatments (which for some players can be overused as a prop for lack of ideas) are thankfully deployed quite sparingly and tastefully. Like Mazurek, he’s doing much to avoid getting too easily pigeon-holed into a convenient letterbox, but at the same time you don’t feel he has to prove anything to the world. There’s an unhurried and assured manner behind every one of these lengthy improvisations / constructions, and I never once felt I was being led down an endless pathway of self-indulgence or unnecessary hot-air extemporisation.

My sense is that Gabriele Mitelli works in a highly intuitive manner, feeling his way from one end of the tune to the other, at the same time managing to inject dynamics and shape as he proceeds, so that each tune manages to tell a story or follow a pathway in its porous open-ended manner. I say stories, because at least two of the pieces here refer to the life of a fisherman and the rich crop of marine life (one tune has an octopus in the title), and there’s a catch of good tunny fish pictured on the cover. At this point one might like to invoke the famous piece by Mingus ‘The Shoes of the Fishman’s Wife’, but it’s just a coincidence. Really warming to this enjoyable record…will look out for more work from this fellow. (24/10/2019).