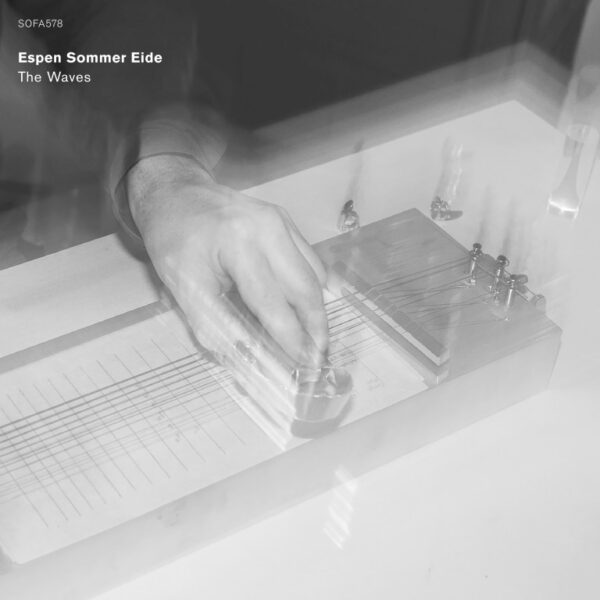 Norwegian genius Espen Sommer Eide is probably better known to you as Phonophani, under which alias he made some intriguing glitch records for Rune Grammofon starting around 2000; he’s also in the electronica group Alog who have been quite prolific since 1999 for that same label. Eide is here today with something far more ambitious and unusual, called The Waves (SOFA MUSIC SOFA578) which he made in a house in Maastricht with the help of guest musicians Mari Kvien Brunvoll and Martin Taxt; I think it’s mostly Eide playing though, as he’s credited with performance and composition of The Waves (along with recording and mixing the album).

One point of interest is the use of “custom made and modified” instruments, about which one would love to know more, but few clues are given – apart from the cover photos, which show a hand manipulating what looks like a home-made table-top electric guitar, playing it with a small spanner and a tuning fork. I mention the Marres house as it’s got quite a bit of history…formerly owned by a family of brewers who lived there for most of the last century, it’s now become a House of Contemporary Culture. This history has been of some interest to our man Espen Sommer Eide, along with the interiors and the rooms of the house, and he’s tried to feed it all into the construction of The Waves in some way. I suppose the best way to get onto his wavelength in this regard is to see the planned “exhibition” of the album, which will be played back in Marres house and allow the listener to experience “a musical journey that transports them from one room to the next”.

As part of this rather intangible concept, it seems that ghosts, memories and “aural shadows cast by lost times” play a part of the total effect. I’m prepared to lend some credence to this, as Eide has spent some time honing an artistic process that involves some awareness of history, site-specific locations, archival studies, knowledge of local language, and other things besides, which could well amount to a rich cultural stew. The added layer to The Waves is spoken-word text, which draws from the works of Virginia Woolf, Betrand Russell and Alfred North Whitehead, and passes on a philosophical veneer to the music as Elina Bry delivers herself of her readings.

All of this may sound remarkably ambitious, but it’s a fairly innovative concept and Eide uses it well to help structure the piece, with each separate track representing something about each room in the house that is visited – we move from the Slaapkamer to the Tussenkamer to end up at the Wachtkamer. I wish I could find more interest in the actual music and the sounds, which are largely unsatisfying and vague; the music gets twee and sentimental with its simplistic tunes, and the sound-art abstracted portions are just too insubstantial for me. Unengaging, flat. (24/10/2019)