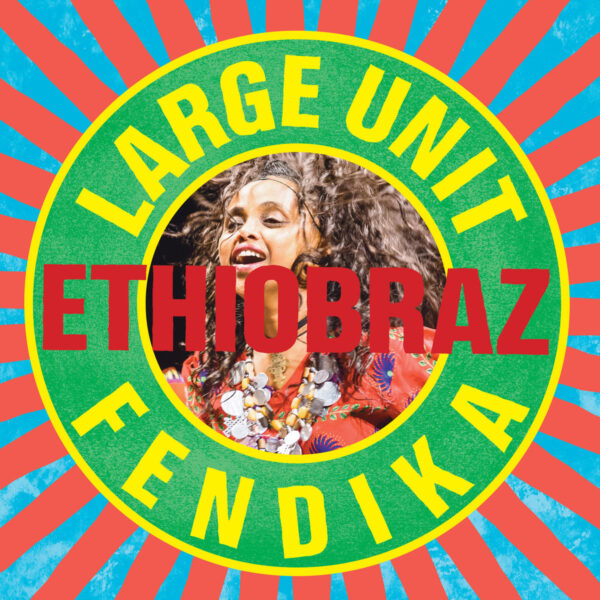 We met Norwegian jazz improv drummer / percussionist Paal Nilssen-Love and his label PNL Records last year with reviews of his albums “New Japanese Noise” and “New Brazilian Funk“, both live recordings in which PNL collaborated with musicians drawn from the Japanese experimental electronics scene and Brazilian jazz musicians respectively. Likewise, “EthioBraz” is another live collaboration, this one a meeting of PNL’s Large Unit music ensemble and Ethiopian dance and music group Fendik at the Molde Jazz Festival in Oslo in 2018. Joining them on stage was special guest Terrie Hessels of Dutch free jazz / punk band The Ex, with whom PNL first visited Ethiopia in 2009. Since then, PNL has made several trips to Ethiopia and also to Brazil (which he first visited in 2013), establishing contacts with musicians and dancers in those countries, and drawing musical influences from these contacts into his own work. The live collaboration that took place at Molde Jazz Festival represents a culmination of PNL’s work and the work of his Ethiopian and Brazilian contacts who joined him and Large Unit.

Compared to “New Japanese Noise” and “New Brazilian Funk”, this is a very accessible album sure to appeal to a wide audience: with few exceptions, the music is energetic and joyful in mood. The song that kicks off the album, “Zelesegna”, featuring just a soaring vocal from Nardos Tesfaye and a stringed instrument played with a bow, should not put people off as it isn’t typical of the music. A better start for most people will be the next track “Capoeira Mata Um” featuring Paulinho Bicolor (whom we met on “New Brazilian Funk”) playing his scrapy cuica with back-up from a jaunty acoustic guitar melody loop that later expands into the big-band jazz set-up with layers of percussion and plenty of brass. Tesfaye returns with that impossibly wide-ranging voice that flies over desert and mountain on “Anbessa” and leads a choir and the jazz orchestra in a song full of anticipation and urgency.

All through the album tracks entice listeners to just get up and dance, no matter how unfamiliar the Ethiopian melodies and music structures might be, or how manic the instrumental jazz playing becomes. The surprising thing is how well the big band jazz sound and the Ethiopian musical elements blend and harmonise, given that much Ethiopian music often seems quite nostalgic or melancholy and even Ethiopian jazz music (from the 1950s – 1970s heyday) sometimes has an air of slightly sinister mystery. While the album doesn’t dive straight into the big band jazz deep end and takes its time easing into the fun, listeners will be rewarded for their patience about halfway through the album when the musicians hit “Shellele” and the brass section and the guitarists go for their lives with smart sassy sax playing, fat trumpet blowing, deranged guitar soloing and trilling electronics on what is easily the most enjoyable track. The fun and joyfulness continue on “Nargi” with Tesfaye leading a call-and-response routine with other singers in the combined Large Unit Fendika band and the music later rallying to her in its own fluttering rousing style. “Gonder” features more virtuoso singing from Tesfaye in a song dominated by stringed instruments though other sections of the band may try hijacking the track. The album concludes with a soulful performance from Tesfaye of “Tezeta”, a song that may be well-known to those familiar with the Ethiopiques series of releases on the Buda Musique label. (On the double CD compilation “The Very Best of Ethiopiques”, this song appears on the second CD and is sung by Mulatu Astatqe.)

In all, about 22 musicians and performers feature on this album and maybe some of them got swallowed up in the big bouncy noise that really hit its stride with “Shellele” and maintained the energy, vitality and surprises all the way through to the end. A shame that Bicolor didn’t get more air time and the musicians working on the electronics seemed a bit hemmed in by all the brassy instruments blaring happily and loudly away. Each and every song turns out to be very different in its own way and this means listeners are never able to guess how each track might turn out based on what they’ve heard before: this is a sure sign of the depth of creativity and the flair for improvisation the whole ensemble has. This album deserves a much wider hearing.