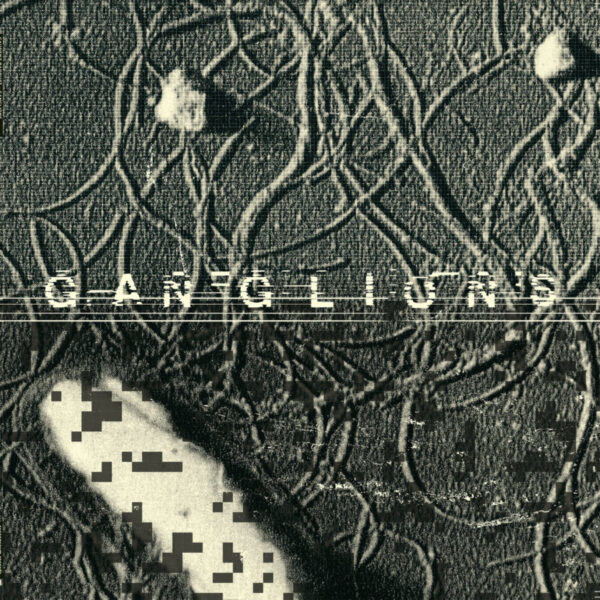 Much to recommend on Ganglions (AUSSENRAUM RECORDS AR-LP-012), a vinyl record of “sculpted” electronic noise made by Gaudrenz Badrutt. This Swiss player has impressed us mightily in the past in the duo Strøm, but also his collabs with Jonas Kocher and Hans Koch – as represented on labels such as Mikroton, Intonema, and Insubordinations. This may be the first time we’ve had a chance to enjoy his severe, highly-focused approach to sound generation in a solo context, untrammelled by the precepts of free improvisation in a group setting.

He’s been active in the field of electronic music for 20 years now, so this may account for the assured and confident manner in which Ganglions unfolds. There’s some information given as to methods used to realise the work. I wish I knew more. There are fleeting references to “internal and external feedback” and to something called “sinusoidal sounds”, which may simply be sine waves from a synth. Voice elements also feed into the work. All I know is that we hear a compelling array of very controlled, unwavering blocks of abstraction, resulting in about 40 mins of very exciting music. On the first side, one might characterise it as a steady drone-hum (a very rich drone), constantly being interrupted by tiny and ugly explosions of noise; you’re no sooner drawn into enjoying the smooth ride, than a clutch of fierce antibodies throw you out of your seat with a jolt. Someone is intent on making sure we don’t fall asleep, that’s for sure.

The plan continues on the B side – the record is two long tracks – except things get even more abrasive and wild. The voice elements start to appear here too, near the end of this B side. Disconnectedness and disorientation are starting to emerge as big parts of the strategy here. One thing we could observe about this primitive B-side is how it’s such a controlled noise, like a very tidy-minded person’s idea of what noise music should be; nothing too extreme, nothing too chaotic, nothing that won’t be returned to the top drawer after everyone’s finished having fun. Compare with any given piece of Japanese noise from the 1990s, where those involved want to destroy the house, smash up the furniture and the devil take the hindmost…I’m also conflicted by the voice parts here, which start out slightly alarming (as I hope they should) but then become rather comical, perhaps without intending to. Even so, Ganglions is not a “dark” record of the sort that might emerge from the Swiss electro-acoustic school, especially the occluded mind of Daniel Rozenhall.

Which brings us to the possible “themes” of Ganglions. It’s supposed to be a depiction of the central nervous system. Indeed, the press notes invite us to see it as a microscopic journey through nerve endings, much like Fantastic Voyage, and waxes lyrical about “nerve cells processing tactile and visual information”, while the B-side alludes to “feedback from the mouth…of a creature with a ventral cord”. To put it another way, the entire record imagines what takes place every time a human being (or any mammal) processes signals running through the nervous system…with the expectation that things can also go badly wrong, with crossed wires, damaged circuits, and wrong information being sent to the wrong departments of the complex human anatomical system. I hope it is all in his imagination; otherwise, Gaudrenz Badrutt would be under investigation for his illegal experiments with reanimation of cadavers and cutting up bodies for his Frankenstein-like explorations.

This is one of the finer entries in the entire cyber-human / microscope anatomical genre that we’ve heard for a while (although curious listeners might also want to seek out Musica Endoscopica, a rather obscure 1972 composition by Teresa Rampazzi), and Badrutt’s clear-thinking and highly-determined approach reaps dividends, meaning maximal listening enjoyment. While you can stream the entire A side online, you can only get the B side through purchase of the record. From 15th October 2019.