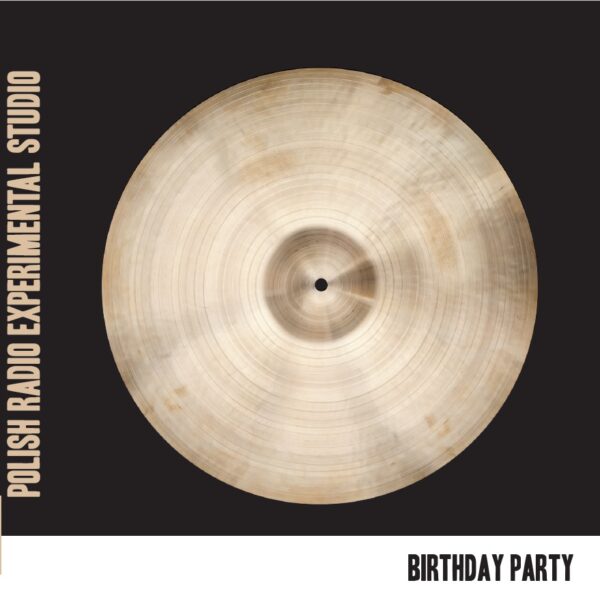 Unusual set of contemporary electro-acoustic music and musique concrète on Birthday Party (BR ES22), a record released in Poland by Bôłt Records and with the name of the Polish Radio Experimental Studio printed prominently on the cover. This label has been working quite hard to remind the world of the achievements of this studio (and its chief composer and engineer, Eugeniusz Rudnik) with a programme of releases starting around 2010 and including the 3-disc set Blanc Et Rouge from 2012.

The studio is having an anniversary, hence the title. In 1959 it seems the very first musique concrète composition was published at the studio; it was ‘Study on One Cymbal Stroke’ by Włodzimierz Kotoński, and was produced by the simplest of means – a recording of a cymbal playing, subjected to various tape treatments. To mark the anniversary of this recording, the Polish radio station Program 2 commissioned contemporary Polish composers to create new works inspired by the cymbal piece. The results are mostly what we hear on this disk, although there is also the original 1959 recording which starts off the CD, and a 2016 work called ‘Sequenza I. Study for a Second Cymbal Stroke’, composed by Cezary Duchnowski. Among the all-new recordings, we have works by Robert Piotrowicz, Teoniki Rożynek, Tomek Mirt, Miłosz Pękala, Wojciech Błażejczyk, Hubert Zemler, and Włodzimierz Kotoński.

Most of these were realised using percussion instruments, but in some cases the composers gave themselves a lot of leeway – Wojciech Błaźejczyk plays a lot of household objects and non-musical devices to realise his work, and others used doorknobs and springs. Tomek Mirt plays an analogue synthesizer. All of these pieces are quite subtle and understated, and the listener must work hard to discern the compositional changes. One thing I noticed is that Włodzimierz Kotoński’s original piece isn’t massively dramatic, but he made his point in less than three minutes; everyone else here requires around 10 minutes to allow their statements to stretch out.

The sleeve notes, by the radio producer Jacek Hawryluk, concentrate almost exclusively on the technical means by which everything was produced, and there’s no investigation of content or meaning; it reads like a cross between a radio operator’s manual and a DIY magazine. On the whole, this is a rather process-heavy set, full of tepid grey drones; I’m not feeling the sublimation from it. From 4th November 2019.