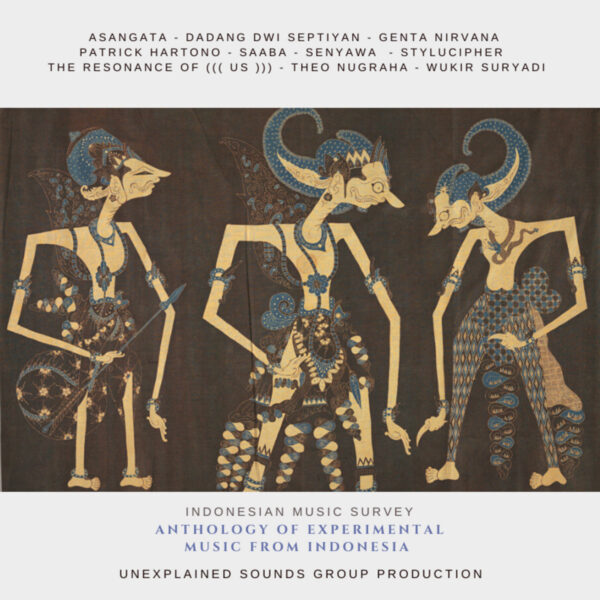 In his personal and professional quest to find and document underground experimental music in all corners of our planet, Raffaelle Pezzella (of Sonologyst / Unexplained Sounds Group) has compiled this collection of Indonesian artists working in their particular music cultures and traditions, using tools, techniques and ideas picked up from formal experimental / avant-garde music scenes outside Indonesia to create some fascinating and intriguing fusions of their music and Western styles. Most of the music featured on this anthology is of either an ambient, drone ambient, musique concrete, noise or soundscape / sound art nature, reflecting perhaps a combination of what Pezzella was able to find and his preferences, though interestingly a couple of artists featured in the USG anthology, Senyawa and Wukir Suriyadi, have also been featured on another, earlier compilation “Pekak! Indonesian Noise 1995 – 2015: 20 Years of Experimental Music from Indonesia” which emphasised harsher noise, industrial and metal-influenced experimental music.

Since I mentioned Senyawa, we’ll stay with this artist who leads the charge with “Sujud (Prostration)”, a beautifully bewitching piece dominated by an acoustic lute-like guitar with darkly jewel tones, a shrill swirling violin and an undercurrent of uncertainty in the choirs of voices chanting in the track’s shadows. The song has a strong ritual feel in the samples of group and solo chants. As it continues, the music becomes ever more insistent, almost hysterical in its shrill pitching, and a hypnotic quality is present: just the right sort of unsettling acoustic ambient piece to introduce listeners to the world of contemporary Indonesian music. By way of contrast, the track immediately following, Asangata’s “Leletheking Bawono” is a dark drone ambient piece with a touch of slightly crumbly noise overlaid by Islamic-style chanting / singing.

Wukir Suriyadi scores not one but two spots on the CD with “Solo performance in Bali”, a zippy swirling seesawing exercise in electroacoustic improvisatory chaos, and the equally unsettling and unhinged “Spatula”. Both tracks will probably have most listeners stretched out on the couch suffering severe motion sickness. The jittery string-work of “Spatula” finds its electric guitar noise equivalent in the introduction to Gaung Jagat Ensemble’s “Saturday No 3”, an otherwise free jazz noise improv number that almost recalls John Zorn’s past Painkiller project. If you really want pain though, and hellish pain at that, you need to fast forward to the STYLUCIPHER noise track of that name – you will get plenty of it, I guarantee you that! After the screaming and the jagged noise electronics die down, noise of a scrabbling-insect-dashing-backwards-and-forwards kind greets you in Patrick Hartono’s “The Return”, later turning into a more relaxed ambient soundscape work.

The originality, energy and inventiveness across this compilation are high and convey something of the bewildering and often highly ambiguous nature of modern Indonesian society with all its chaos, extremes of wealth and poverty, and cultural sophistication and tolerance on the one hand and exploitation, corruption, political fascist tendencies and ethno-religious fanaticism on the other. Some tracks initially seem harmless but on closer listening reveal a darker, sinister undertow of psychic near-violence while noisier pieces may have a more serene and peaceful aspect. This may say something about how Indonesians might view their world, where perhaps very few things can be taken for granted and can’t be seen in purely black or white terms. Several tracks have a hypnotic quality as well, breaking down the barrier between the music and its audience, and inviting listeners from wherever they come from to immerse themselves in the chaos and contradictions of Indonesian culture.