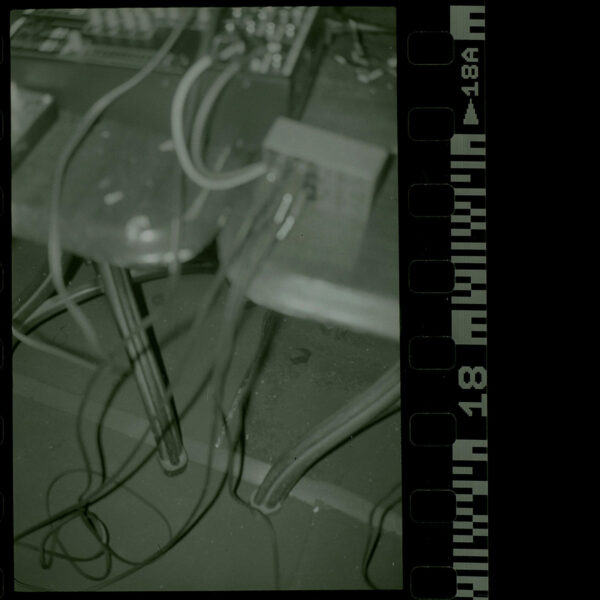 Got a new package from Romain Perrot, the French creator of many kinds of bizarre and extreme noise, which two new releases on his Decimation Sociale label. We’ve been following his work for some time now, and while for a long time – mostly the time when he called himself Vomir – he was the self-styled “Harsh Noise Wall” creator occupying his own unique niche in the overcrowded field of table noise, he took a strange turn around 2014 when he discovered an ability to make crazy songs with an acoustic guitar, making releases that defied normality with a hearty blast of juicy creative energy.

Here on the record by Maginot, he’s teamed up with Paul Hegarty (no less a man), the Irish demon of noise who records as Safe and runs the DotDotDot Music label with its family of outre seven-inch singles 1. The self-titled record Maginot (DSCDMAGINOT) was recorded in Paris and Hamburg and contains some 30 of these fascinating bric-a-brac and junky-styled noise episodes, realised by means of voice, tapes, and electronics. Those listeners who have closed their steel shutters to the “noise” genre need not be afeared, as this is a highly “listenable” record, free from the shrill feedback and roaring buffets that used to characterise the Vomir period. One highly prominent feature is the found voice tapes, where the familiar trope of using telephone conversations and TV adverts alongside a backdrop of aural rubble has rarely sounded so compelling and effective. There’s also a slightly relaxed style to the playing, if we can call it that, and neither musician feels the need to overstate the case with 100 mph careening noise or pushing FX pedals to the floor as if they were accelerators. Listen out for the troubled, primitive grunts and groans of a man – I assume they’re being pushed out of the diaphragm of Romain himself – which punctuate the musical experience from time to time. These pained moans will stop you in your tracks, or your money back.

Inside there’s a menacing photo of a submarine, and on the back cover the duo are in some dingy venue staring at the table of equipment as though they haven’t got a clue where they are or what to do next. And to cap it all, the last track is called ‘Edgar Froese’ – I ask you, could life possibly get any better? Soon, you too will be emailing Romain to tell him “Make Mine Maginot”.

Second item is no less desirable. Matter of fact Saboteur Saboteur (DECIMATION SOCIALE DSCDYBRORO / 4iB RECORDS 4iB CCD/0619/041 / NOSTROMO / POCO RECORDS POCO 007) is the kind of absurd, anarchic record that makes me glad to be doing TSP, as it’s the only way I ever get to hear such unique and far-out examples of enlightened human endeavour…I make no apologies for regarding Romain Perrot as an “Outsider Artist” of the first water, as he’s capable of giving us this raw and uncut musical information direct from the gut, with no mediation. This was played by a duo, Romain Perrot with Yves Botz, and it’s a live recording made in Paris. They play guitars and pianos, by which I mean they let loose on these instruments in the same way that a desperate hunting man elects to kill a tiger with his bare hands. The duo also sing – by which I mean they yell like drunken, insane hooligans kept behind bars while being prodded with electric rods. Plus the record is recorded with maximum distortion and lo-fi and consequently hammers the listener like a sandwich made of gravel and six-inch nails. So far so good…we’re making a welcome return to the “ultra shit folk” genre that Roro made all his own on the record ta bouche de fraise me rend si sauvage, with all the savagery and incoherence fully intact.

The record plays for a continual 45 mins and though it may comprise a number of separate episodes edited together, I have no doubt the makers of Saboteur could sustain this level of mania and mayhem for several days if called upon to do so. I’m in favour of any music that makes a mockery of common sense and scrambles the brain, upsets the expectations of everyone, and runs roughshod over good taste, but especially so when the results are as full-on and engaged as this. Shrieking, thrashing and hammering on the keys in spastic fashion is the preferred mode of unleashing this cathartic spew, and you can tell from the vocal utterances in particular that the players have entered that shamanistic state of self-absorption that’s the hallmark of all great guitarists from Hendrix to Derek Bailey.

Well, I find Yves Botz is a member of wild noise combo Dustbreeders (with Michel Henritzi) and Mesa Of The Lost Women, and also played once with the “proper” electro-acoustic band Soixante Étages. I’m just encouraged to see his capabilities for non-normal noise production are present and correct on this mad record. In addition, there’s a Black Metal styled-logo for the band name on the cover, a street protest photo on the back, and Lucien Schleemm is credited with photography. Lucien Schleemm, whose certifiably mad record for Editions Vibrisse we reviewed in 2018, is also a member of Micro_Penis, and reminds us of the whole Seb Borgo nexus of insanity in which Romain Perrot has been complicit too. It took four labels to release this, and no wonder. Just great!