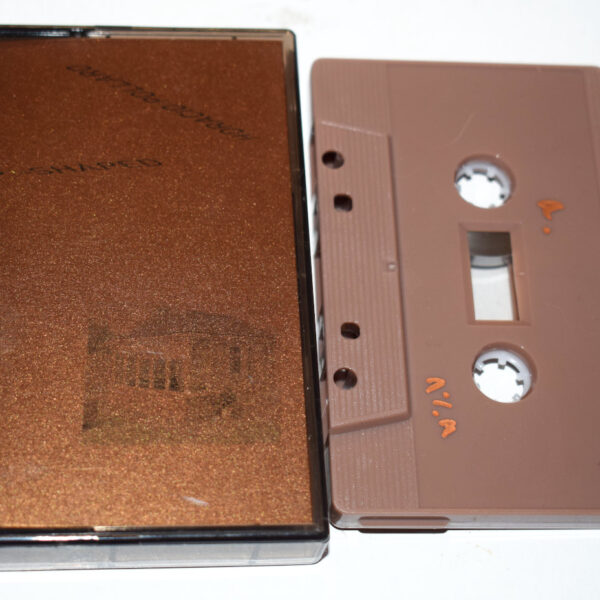 Welcome return of Horacio Pollard, an old favourite in these pages, who we value for his eccentric sense of humour as well as his unhinged approach to making noise. Last heard him with the live collection Performance Appraisal (for Drid Machine) which arrived at the end of 2017; today’s cassette, Quick Glaze P-Shaped (NEIGH PERCENT MUSIC N%030), was sent to us from Germany where he may currently be camping out, and is on his own Neigh Percent Music label. Only 50 copies were made and while Horacio is just about doing the Bandcamp thing (in a peremptory manner) his online presence is also distributed among a Google blogspot, a Soundcloud page and a Vimeo page. In most of these platforms I’m happy to see he’s maintaining an interest in hideous colours and unreadable fonts, bringing the anarchy of old-school fanzine layouts into cyberspace.

I see I was pretty offhand about the live tape, but Pollard makes a strong return to form with Quick Glaze P-Shaped. For one thing it’s nice and short (a C30) – enough to give your system a good jolt of chlorophyll, spruce up your fronds and send you bouncing on your springy way. Several short, untitled episodes are clunged together on each side, creating a delirious dream and a carnival of noise, everything following on relentlessly with scant regard for logic. Plenty of wild distortion, remorseless beats, and crazy synth sounds flying around in deliciously uninhibited fashion. Loops, layers, and cross-rhythms galore – as much as one could feel the body being energised by the music, at the same time it frustrates any attempts to move around to it with the body or make sense of it with the brain. One quality that may be contributing to the overall effect is the sheer airlessness – you’ll be lucky to find a breathing space in among all this dense, overcrowded wall of digital insanity, save for a couple of brief moments on Side A where a sampled voice of a woman appears to be quietly delivering a lecture. I can feel my brain disintegrating the more I play this, and one side-effect seems to be that I can hear many phantom noises and ghost notes, tunes that aren’t really there.

Available in four different metallic card covers; described by its creator in his own absurdist word-salad manner as “double glazed, self insulating P-shaper with undulating flower patterns and a Venus fly trap.” From 11 November 2019.