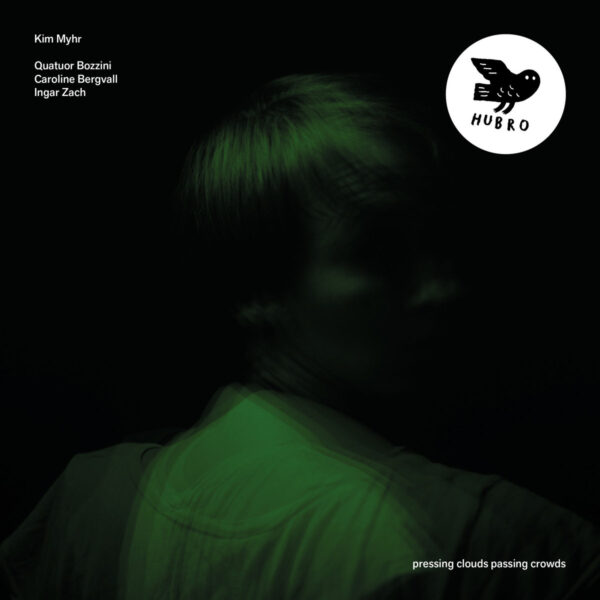 I’ve encountered some interesting output from Hubro before, Lush Laments For Lazy Mammals by Håkon Stene for example – containing an interesting interpretation of Gavin Bryars’ Hi Tremolo – sticks in the mind. This album, pressing clouds passing crowds, is a composition by Kim Myhr made up of six parts, written specifically with Caroline Bergvall’s voice in mind but with the music actually completed before she got involved. Indeed, her contribution to the material is intended as a response to the prepared music, I’m led to believe. For those fanatical about detail, pressing clouds passing crowds was written as a commission for the 2016 Festival International de Musique Actuelle de Victoriaville. Myhr sometimes cites Morton Feldman or Steve Reich as influences – but particularly Robert Ashley while he was composing pressing clouds passing crowds, perhaps referencing Ashley’s use of the human voice.

On this recording of the piece, Myhr plays 12 string guitar and is joined by Bergvall, percussionist Ingar Zach and the Montreal-based string quartet Quatuor Bozzini.

The first piece – sizeable at nearly thirteen minutes long – “passing through” has a repeating guitar figure; picked leisurely. String swells. This is followed by “days” which allows guitar strings to produce a chord with tiny modulations joined by a cantering high neck strum. Individual strings are allowed to break loose and do their own thing. This actually segues into ”thngs dispr”. Bergvall‘s words are corralled here. Towards the end, the guitar is processed to sound like late 80s alternative rock, like something too quiet to be included in MBV’s Loveless, to my ears at least. “past the” has a more subdued start; single plucks from one instrument, harmonics from another. A journey – perhaps a regular subject in Bergvall’s work (her work “Drift” “…drew on the Old English text The Seafarer in reimagining the ordeal of the mediterranean refugees crossing to Europe…”). Myhr chooses to segue this piece into ”Future Present” with a beautiful harmonic resolution; the string quartet really come into their own. Features the inexplicable yet beautiful phrase “raspberry chaos”, which I like the sound of. The final piece, ”burning” is hypnotic. Advice for those who are self motivated or bored…?

Looking at the digisleeve in my hands, with its uncluttered green and black gatefold design, I originally admire its minimal and mysterious appearance, although when I later compared it to the sleeve image on the hubro website what I thought was a very dark abstract form is instead very clearly a photographic image of a young woman glancing back over her shoulder. It is clear that this must be a printing error sent out for review. Which is a little disappointing, but only from my point of view – not yours. Inside the package, handily, Bergvall’s full text of opening track “passing through” is included in a minimal little booklet included in the package for us to peruse at our leisure. Although, disappointed to find no printed text for the other pieces. That would have been nice to see. Otherwise, this is a fine release.