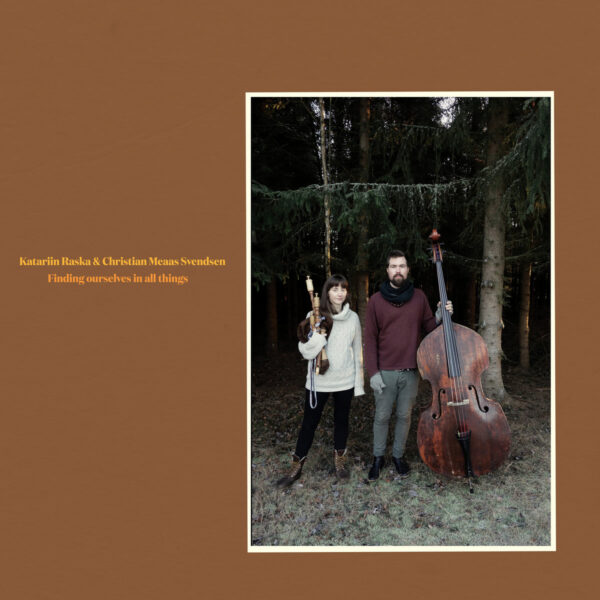 I think the world is still trying to come to terms with the many accomplishments of Christian Meaas Svendsen, the Norwegian musician who has been showing up in these pages for some time now. He does play the double bass, is often associated with free improvisation, and runs the record label Nakama Records, but more than all of this he seems to embody a very particular viewpoint, and more than once I have the idea he’s trying to cultivate a specific sort of musical culture with the devoted conviction of a cult religious leader. The New Rituals record from 2019 was without doubt a benchmark – pairing an improvisation group with a Buddhist choir, evidently in some pursuit of a high-minded spiritual vision and displaying the same sort of insistence of purity and discipline among the players.

Today’s record Finding Ourselves In All Things (NAKAMA RECORDS NKM020CD) is probably going to prove to be another such benchmark, if nothing else on account of its highly unusual soundworld. This time it’s just a duo rather than an ensemble work. Katariin Raska is an Estonian musician and performs in several folk groups in her own country, where she also teaches folk music at academy level. While she can play the soprano saxophone, she’s evidently an expert on the torupill, the traditional Estonian bagpipe. While it’s regarded as a “traditional” instrument in that country, it’s not quite clear when it was established, but it mainly had a place in ceremonial dance. The bag of the torupill is usually made from the stomach of a dead seal, and the older the seal (and the larger the stomach) then the better instrument would result. The astonishing sound of the torupill, and Katariin Raska’s remarkable musical skills, are the focal point of this album, and on the first of the two cuts – ‘Melting With Butterflies’ – we have a non-stop 14-minute performance that beggars belief. An excess of musical information, a dense cluster of notes moving at improbable speeds, with the sort of tonality that is almost painful to endure on the ear-drums. Think of Evan Parker on the soprano sax at his most extreme, only rendered to the power of ten. The “old” sound of this instrument is being updated in a very 21st-century manner, right before your eyes. Not a hideous noise, though; it’s evident that Raska has the right kind of purity and directness in her work that interests Svendsen, along with great craft and technical ability. Frankly, I’m still trying to process this overwhelming “swarm” of music, which is indeed like finding oneself inside a huge cluster of butterflies (or other less benign insects).

The second cut, ‘The Way The Mountains Make Love’, is somewhat more approachable, and the contribution of Svendsen bass is much more in evidence – perhaps he doesn’t appear at all on the Butterflies track. This one is a continual 19-minute drone piece, just right for a bagpipe performance, and the ingenious thing about this piece is how they manage to keep the music off-centre in some way; I mean there doesn’t appear to be a single root note, or else they manage to keep playing either side of it. There is indeed an elemental quality at work, and the music comes very close to the “primal” and “organic” qualities they wish to manifest. This isn’t just because it’s all acoustic, but both players seem to be mystically connecting to something quite deep and, dare one say it, quite old and mysterious. A real magnetic tugging power. I am very much reminded of the powerful drones of Arrington de Dionyso, although he’s rather more flamboyant and showmanlike than these close-lipped taciturn players from Northern Europe. A very strong record. The two musicians have been working together for some time now; they met in 2012 and both performed in the band AIO who made one record in 2014 (self-released on Katariin’s own label). From 4th November 2019.