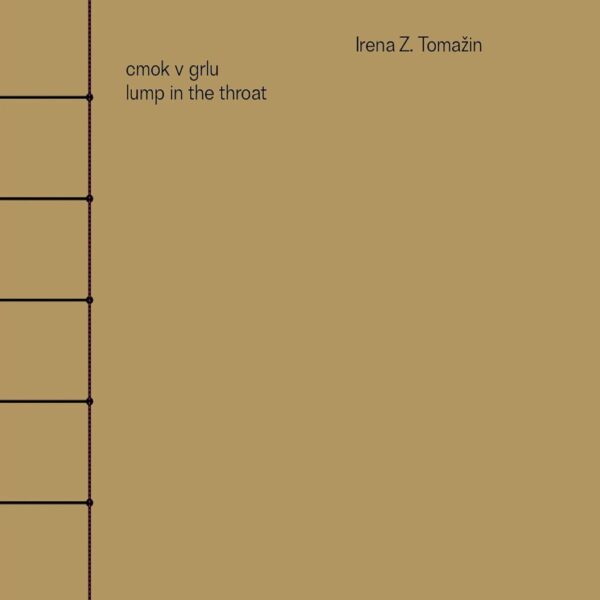 Solo voice release from Irena Z. Tomažin called cmok v grlu (ZAVOD SPLOH ZASCD018), a phrase which translates into English as Lump In The Throat. We heard this Slovenian performer as far back as 2014 on a compilation set called eksperiment Slovenia which presented the cream of Slovenian underground music at that time, contextualised by the writer Luka Zagoricnik. At that time, Irena was calling herself “iT” and made a piece for her own voice and dictaphones which, for this writer, “released so many near-demonic voices in the process that she’s virtually her own exorcist.” In accounting for this singular record, we’d do well to remember that Irena is more than just a voice improviser, but also a dancer and teacher; or to be more accurate she works in “movement theatre”. From what I can make out, her earlier work in dance was a good way to release tension through moving the body; now the body and the voice are both involved, and she teaches her method at workshops and expresses herself in performances and collaborations. She’s been doing this for the last 20 years.

The record itself started out slow for me, with numerous short tracks lasting around 60-90 seconds all frontloaded at the start of the record; I couldn’t follow; things began to seem monotonous, a limited range of sounds. However the longer pieces near the end, especially the ‘Klic Meduze’ which weighs in at 8:34, are putting more salt on my rashers. And the title of that one clonked my imagination too – it means ‘Medusa’s Call’. Any hero from Greek mythology would recognise the diabolical tone which is at the core of this menacing piece; turning into stone is the least of our worries. Another favourite is ‘The Mouth’s Guts’, one of five (including the Medusa piece) collated within a longer five-part suite.

The press note goes to some lengths to catalogue the specific details of Irena V. Tomažin’s technique, pointing out such highlights as “repetitive mechanics of the tongue” and “teeth and air in micro-resonating spaces of the oral cavity”. Well and good, but this three-line paragraph reads like an anatomy lesson to me, a clinical description of how the human mouth does things. I’d prefer to think that Tomažin’s strength as a performer comes from her own inner being, and that as noted above it’s a more holistic process involving the whole body, and her own soul and mind. In short, her “oral cavity” is magnificent for sure, but her music is all about the much vaster cavern of her inner being. She certainly doesn’t seem to lean on any electronic effects, and apart from overdubbing on a few tracks so she can scream and wail alongside her own alien hissings and screeches, this is pretty much raw uncut emissions, of an earthy and elemental nature. If it came in the form a physics student could understand, it’s likely a new element would be added to the periodic table.

The temptation is to “file” this music alongside performers such as Phil Minton, Junko, and the rather obscure Vanessa Mackness; all three have been associated with free improvisation, and also could be described as explorers of an interior landscape, although Junko does it in a violent and shocking manner, while Tomažin is more accessible and restrained in comparison. She’s also less deliberately “ugly” than Minton, and once you get past the unfamiliar surface of this record you will find nuanced beauties to be discovered and appreciated. If we have to any “filing”, I would prefer to align Tomažin with Henri Chopin, Bob Cobbing, and other such extraordinary creators who are all loosely affiliated as “sound poets”. Even though she doesn’t deconstruct texts in the way they had an appetite for doing, there’s an undeniable poetic streak to this release. It also comes bound in an elaborate art book, landscape format, side-stitched, containing many drawings by Matej Stupica. Stupica’s drawings were done in saliva and ink, which seems fitting for the music on offer. The book is printed on shifting stocks and variant paper sizes, and many creators are credited with its design, production and binding. Excellent all round! Arrived 15 November 2019.