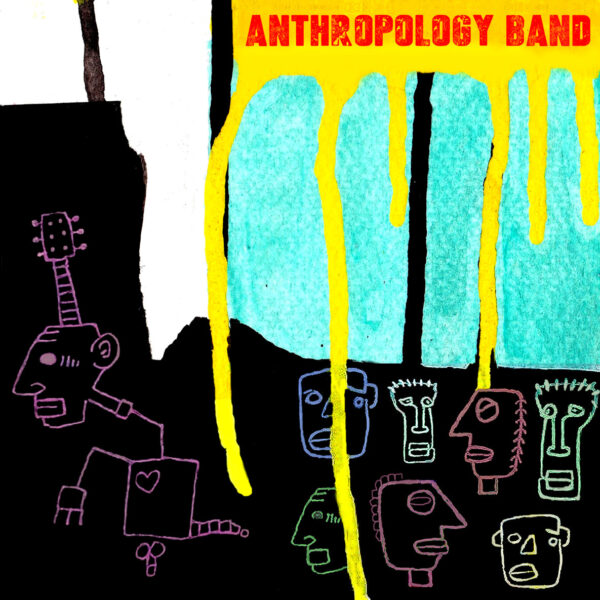 Anthropology Band (DISCUS MUSIC DISCUS 90CD) marks Martin Archer‘s latest foray into the lands beyond the oft-cannibalistic realm of contemporary jazz. I was previously enchanted by Vestigium, one of his collaborations with Julie Tippets, and still use it as an antidote to accusations that there’s no new music anymore. Unusually perhaps, for such a progressive composer, this project has a nostalgic tint, gazing back at the halcyon days of Miles Davis’ electric period circa Bitches Brew. However, this take on that milestone occurs in a parallel dimension where arranger Gil Evans, not producer Teo Macero, served as Davis’ key collaborator.

Lest one be tempted to anticipate a pastiche or worse, a tribute, aside from the odd passing resemblance (guitarist Chris Sharkey does a good turn as John McLaughlin; trumpeter Charlotte Keeffe as Miles), Anthropology Band is not about historical re-enactment but of analysing the play of variables such as group format. Archer presents two versions of the composition: 1) a septet (control group) and 2) an orchestra, which makes Anthropology Band an authentically experimental work. Even the title is redolent of scientific enquiry.

Also striking is the force of the septet, which rocks, swings and takes flight in roughly equal measures. The music is notated and often bass-driven, yet loosely structured enough to allow ample room for soloing – guitar pyrotechnics being a specialty. While the set loosely adopts the Bitches Brew jazz fusion formula, it’s reminiscent of contemporary equivalents like John Zorn’s Electric Masada, which augmented his free jazz/klezmer fusion quartet with abstract electronics and hard-rock grooves. Although never so raucous, Anthropology is a high octane vehicle of its own with a steady clip of flighty highlights. Yet even when the pace slows, as on the simmering ‘Fire on 88th’ (all rolling bass and liquid trumpet), the mood(iness) never lets up.

The second disc drops the energy of the septet to address the Gil Evans question and the results are suggestive of a number of possible musical directions; soundtrack for one. Keeffe reprises her role here as trumpeter and co-orchestrated the pieces with Archer, which effectively makes her the project’s Davis and Evans. This signals a significant departure in sound as well, making this the less immediate of the two versions. As the jazz fusion element shifts from rock to classical, there are hints of sluggishness under the weight of so many participants, leaving a sense that the orchestra is but a (stationary) vehicle for the jazzier pyrotechnics. However, it does work up a good head of steam before long. ‘Behind Another Sun’ is a particularly bracing fusion of contrasting tendencies – nimble bass balanced with coordinated stabs of brass. All told, it’s a fascinating point of comparison and sibling to the septet version.

As with most of Archer’s work, Anthropology Band is a refreshing proposition for tired ears and the Miles mythos alike – so much so that this project saw Archer removed from the studio to which he’d long since retired to undertake a short tour earlier this year (ironically, shortly before the current lockdown began). While I sense that this project satisfies Archer’s curiosity regarding the Gil Evans question, I wonder whether there’s further mileage to be drawn from this niche? What if Teo Macero had produced Kind of Blue, perhaps?