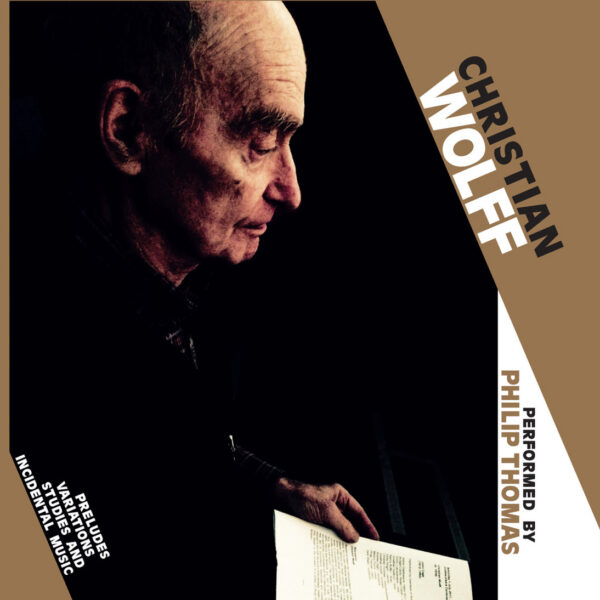 Pianist Philip Thomas has made a distinguished career of performing the works of the ‘New York School’ figures like John Cage, Morton Feldman and Christian Wolff. The latter forms the central theme for this collection of his works spanning nearly 50 years. Special attention is paid, initially at least, to Wolff’s debt to Cage and how this manifests in homage to the likes of Satie and Chopin. Several pieces draw upon the pianist’s relatively recent fascination with the kind of free improvisation pioneered by the likes of AMM and, in particular, John Tilbury, who receives several tips of the hat here.

Thomas works with the open-ended compositions that emerged from Wolff’s work from the late 1960s onwards, following on from his preoccupation with pointillistic composition in the 1950s and indeterminacy in the early 1960s. By this time, his notation had evolved into something so fragmented, static and discontinuous that even the composer himself was at a loss as to comprehend it. Cage, benevolently, described it as the ‘classical music of an unknown civilisation’. Those of us less conversant with Wolff’s idiolect may struggle with it.

Heard casually, this music can seem bewildering. Granted, the playing is focused and change is constant, but it’s an indiscriminate mass on initial listens. With no evident sense of direction or system of values, it has the aspect of an endurance test. However, while acknowledging the existence of such difficulties for the listener, Thomas, naturally enough, contends the point. Although the preponderance of ‘variations’, ‘studies’, ‘preludes’ and ‘incidental music’ in this collection may (self-consciously) bely a uniformity of sound, evoking for some a sense of incompletion or superfluity, for Wolff, such tendencies represented the dynamic potential of ‘social, collective’ political consciousness… oriented “towards some kind of future, open to something that might come next” (as is explicitly stated in the notes to his 11 Preludes (1980-81)). For Thomas as a performer and interpreter of Wolff’s musical language, this fund of almost limitless potential has perennially proven both challenging and ‘beguiling’.

In the accompanying booklet, Thomas’ commentary helpfully demystifies matters with historical, technical and theoretical background, providing a starting point for the uninitiated by crystallising the spectrum of subtle differences between one composition and the next, as well as their points in common. For instance, the three Satie Variations (1995) convey a characteristically mechanical minimalism measured into simple, phrases with unannounced shifts in key and tempo, but they carefully subdivide Satie’s musical language into themes of repetition, simplicity and bitonality (it’s worth reading up before listening).

While ostensibly similar in mood and manner to subsequent inclusions, the methodological difference is pronounced. For instance, equally generative but distinctly structured, ‘Variations on the Carman’s Whistle Variations of Byrd’ (1972) subdivides into 8 melodic lines that the performer is at liberty to follow or ignore. By contrast, ‘Incidental Music’ (2003-04) is a meticulous negotiation between indeterminate and openly improvised performance that leaves no stone unturned as it bundles 100 discrete sections into its playing time of just over an hour. Boundaries may be porous, but the point seems to be that these myriad variations are not so much works in progress as a process in process. Which perhaps makes the durational limitations of the CD a bit constraining.

Thinking back to Cage’s ‘unknown civilisation’ comment, one imagines it to be one in which inhabitants respond to new and perplexing environmental conditions with moment-by-moment recalibration rather than waiting, as does ours, for the next big upheaval before blindly panicking. The music here will shock the system of those unfamiliar with Wolff’s music, but it is guided by a simple principle of freedom. That said, few things confound the rational mind more than simplicity.