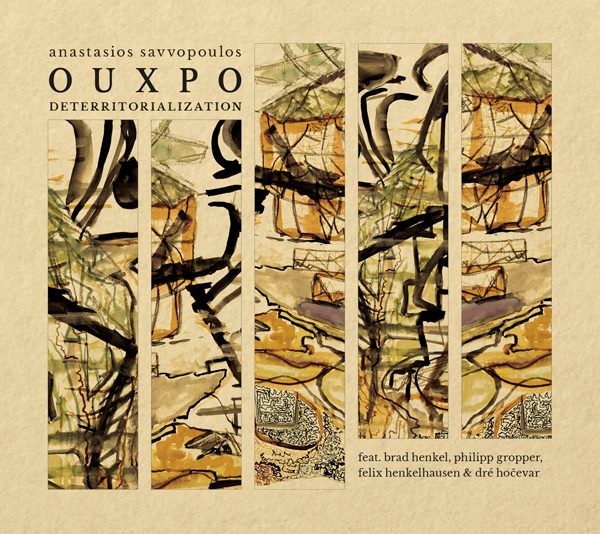 Here we have a five-piece improvising group based in Berlin, all names new to me, but they’re very good. Collectively called OUXPO, the leader is the Greek guitarist Anatasios Savvopoulos, and the four other members are American (Brad Henkel, trumpet), German (Philipp Gropper, tenor sax and Felix Heknelhausen, double bass) and Slovenian (Dre Hocevar, drums). Deterritorialization (EDITION FRIFORMA eff-006) documents two half-hour live performances they gave at a club in Ljubljana in 2018. I’m enjoying the music very much, even if it does remind me for some reason of John Stevens and the Spontaneous Music Ensemble – a lot of their music sounds like it could easily have been made in 1970, and the first OUXPO suite in particular has the same sense of uneasy lostness and cold uncertainty as I savour on records such as Withdrawal (from 1966-67). Even the black and white photos of OUXPO inside the CD here convey the feeling of a journey back in time to a slightly more innocent period where the “rules” of free improvisation hadn’t yet coagulated into the morass of qualified statements, provisional beliefs and contested truths that we currently enjoy across the international musical sector.

However, this may be just a coincidence. If I’m looking for disorientation, I’ve probably come to the right place, since (according to the notes by Laszlo Juhasz) OUXPO are aiming at “a total disruption of expectations”, along with such juicy audience-killers as “unfamiliarity” and “lack of definiteness”. This isn’t just unique to OUXPO; Juhasz would claim that all improvised music must strive to be new and unfamiliar just to even stay alive, and he draws inspiration from the Derek Bailey book to underscore his point. I suppose even the title Deterritorialization has a part to play in this, suggesting a world view where all the possible musical modes, genres and techniques have been “colonised” to a large extent by warring factions, and the only possible approach is to begin a radical programme of reclaiming this turf by means of “deterritorialization”. To put it another way, in my workplace we often speak of managers getting “territorial” when they’re trying to make a power grab or take control of things in a clandestine way. I’d like to think that Anatasios Savvopoulos and his pals are making a bid to redraw the political maps of free improv, though that might be too much a burden to place on their turnups.

And yet this isn’t especially radical or inventive music; OUXPO don’t seem to have the same tabula rasa approach as favoured by Polwechsel, for instance, who were determined to incorporate a lot of modern musical developments into their approach, not all of them derived from the lineage of a strictly free-improv background; conversely, with Savvopoulos’ group, large chunks of the 1980s and 1990s seem to have passed them by. Savvopoulos’ guitar playing in particular – which is absolutely delicious – contains a lot of jazzy licks and melodic riffs of the sort which may please Kenny Burrell fans like myself, but would probably be considered passé by some sterner 21st century players, and even Bailey in 1969 was wondering out loud how he could find a way out of the traps presented by triads and major sevenths. Yet for Deterritorialization, it works perfectly, likewise the restrained and respectful contributions of the other players in this all-acoustic music. For one thing, they never get too loud and they never get “skittery” – the hurdle that afflicted so much English improvisation, when it seemed like every single musician on stage had St Vitus dance or a bad cold (or both). Deterritorialization isn’t EAI either, thank heavens, and instead offers a maximal and rich carpet of notes and musical sounds, all coalescing in an accessible open-ended structure. Juhasz urges us to listen out for the “sonic and musical personalities of the individuals”, and sure enough the five players do contribute their distinctive voice segments to the whole.

To wrap this up, we should point out this is the very first time they played together. There are a lot of improvising groups who would give their left elbows for a debut recording of such assurance. From 18th November 2019.