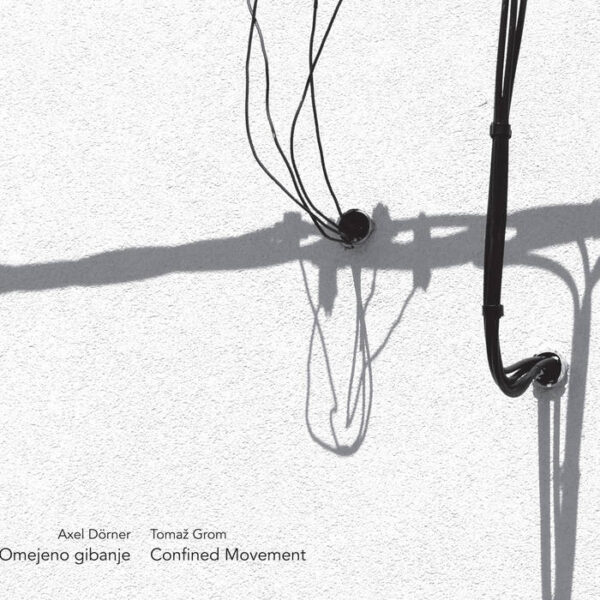 Strong set of improvised duets from the team of Axel Dörner and Tomaž Grom on the album Omejeno Gibanje / Confined Movement (ZAVOD SPLOH ZASCD 19). This is the second album we’ve gotten from this Slovenian label, which so happens to be curated by Tomaž Grom (in fact it seems to be an entire hub of activity, with venues, workshops, performance art as well as records). Have to say signs are looking good for free improv in Slovenia, what with this and the Inexhaustible Editions label.

Grom himself plays the double bass, but on this record he’s also credited with “freeze” (?) and a prepared speaker, which may account for why his instrument sounds so energised to my ears today. He’s like a volcano rumbling away here…besides the floor-rattling deep bass throbs which we crave so much, he also provides percussive attacks and general non-natural clatter, which do much to liven up the afternoon. Maybe it’s just the title “confined movement”, but as soon as the needle hit the groove on this one I couldn’t help thinking of a scaffold, as though Grom were engaged single-handedly in erecting a steel grid using only his bass. It may have something to do with the wild dynamic spaces that he (and Dörner) leave in the music, but he really does evoke the sense of industrial rods growing before you right there in the room.

It seems a while since I’ve heard any records with Axel Dörner on, but this German player has been around the hexagon for a few loops and was, for a time, associated with “Berlin Reduced Playing” or whatever the experts called it. He was in Phosphor for time, along with other notables who advanced this rigid and at times inflexible way of playing. Something of a transformation, on this record at least; haven’t heard such well-articulated and fluid gurgling from the old Axel-Man for some time. Used to be, he would contemplate the serene beauty of his own breath as it barely brushed against the interior of his bell, while many aesthetes swooned in their velvet jackets. On Omejeno Gibanje, Dörner is that bit more aggressive, snatching what chances he may get to put forth a concise but forceful remark in the conversation, often getting quite exasperated or agitated if he feels he’s being ignored.

I’d like to think it’s the zesty style of Tomaž Grom that is prodding him towards these responses…more than once it almost sounds like the bassist is jogging the elbow of the trumpeter on record, as if to say “are you going to take that from him?” Yes, I seem to be saying that the best improv pairings are ones that verge on turning into a fist-fight in a bar…but for a more rational response, do read the lengthy sleeve notes by Luka T. Zagoricnik, where he describes in micro-detail what he thinks happens when two improvisers meet up in a room for the first time, and what it all means. I do like the bit where he describes it as a “collision”, because that to me characterises this record perfectly; one does get fed up of music where the genteel players are too respectful to each other, and it’s nice to hear something where they get a bit coarse and impolite once in a while. From 15th November 2019.