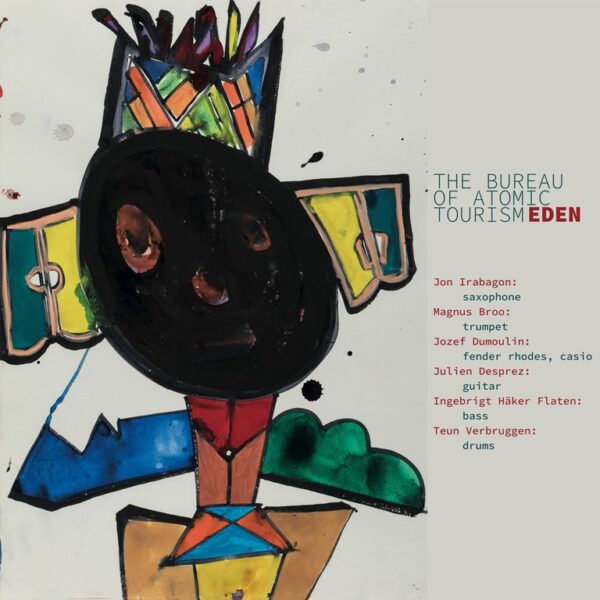 I never heard the music of The Bureau Of Atomic Tourism, but they’re reckoned to be quite a force in Belgian jazz, ever since the leader Teun Verbruggen formed the outfit in 2011 at a music festival in Antwerp. From what I can gather, the original line-up featured not a few American players, including the quite-good trumpeter Nate Wooley, but they’re all gone now and only the two core Belgian players remain; besides drummer Verbruggen, the pianist and composer Jozef Dumoulin. You may recall we heard these two trying their best to accompany Keiji Haino on the record The Miracles Of Only One Thing from 2017, with mixed results. Making up The Bureau in 2019 are a number of players from Scandinavian and French jazz scenes, plus the American saxophonist Jon Irabagon.

For this come-back LP, recorded in 2018 in a Belgian studio, Jozef Dumoulin was asked to compose all the music. Apparently this could have turned into a volatile situation, given that The Bureau Of Atomic Tourism like to play fiery straight-ahead jazz, while Dumoulin likes to indulge his eclectic side and delights in wrong-footing audience expectations. In fact, I think we may have heard a taste of this quality on the eccentric live LP of songs he made with Lidlboj in 2018. The results on Eden (RAT RECORDS RAT 042 / WERKPLAATS WALTER WALTER 004) are, once again, very mixed; some of the tunes are lack-lustre and rather ordinary fusion jams, with Fender Rhodes, electric guitars, and tasteful horn lines; the “artier” pieces are just about unlistenable, full of annoying keyboard runs taken at high speed, illogical and silly sounds, tricky time signatures, music stopping and starting at random, that sort of thing. The band just don’t seem capable of getting into a groove, and their every move is over-thought, resulting in music that’s stilted, clotted and clumsy. Not recommended. From 27th November 2019.